Text description provided by the architects. To construct a traditional and simple Chinese home signifies the abandonment of dramatic design language but represent the simple word in the manner highlighting “no subject”, “weak comparison” and “against distinctness”.

The wall, commonly shared by the living room and the bedroom remains blank to weaken its sense of core. The wall on the opposite to the center is covered by bookshelf, which can be integrated together with the dining table, work desk and sofa so as to form a huge furniture wall.

The bookshelf is designed by multiple modules. They’ve formed larger and smaller grids while the original order is broken by the work desk, the sofa, the air conditioner and the beam. Finally, some cabinet doors are embedded at random for the sake of collection of some articles; such doors, when opened, are vivid as windows on the building elevation.

As to the wooden doors on the white wall and to the beam bottom height, the dwellings’ “local” practice was adopted. When the wall was not leveled, the elm frame was embedded around the door hole and fixed with the rough wall, then the door frame and the wall were sealed by cement mortar and leveling putty, etc. Finally, the door and the door frame were linked with metal hinge.

The lamps at home, basically of the same structure, were made manually by making use of the abandoned timbers.

In order to depict infiniteness from skimpiness, the color shall be simple and natural; besides, the materials shall be mostly intimate to people, such as wood, bamboo, fiber and cotton which can arouse the people’s the most original sense of intimacy. 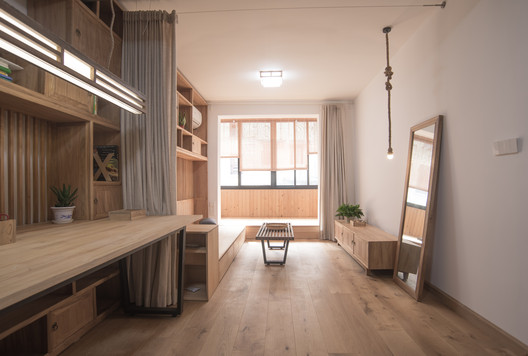