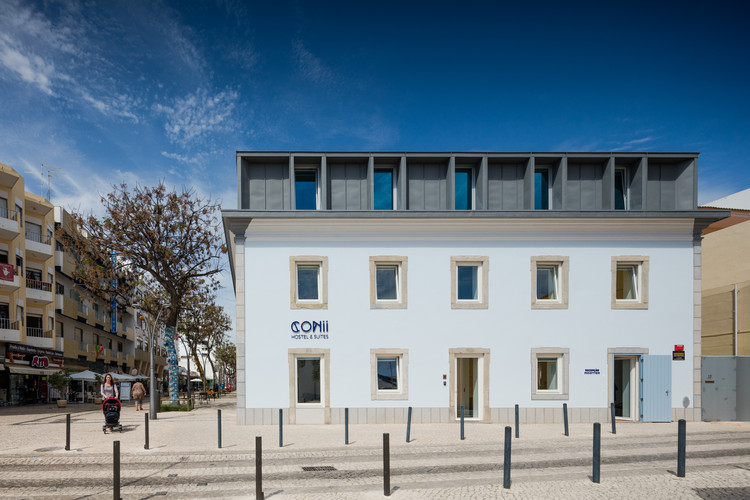 Text description provided by the architects. Building refurbishment and adaptation to Hostel in Quarteira, Portugal. The intervention consists on the rehabilitation and extension of an old building dated from 1896. The building is inserted in the centre of the touristic city of Quarteira in Algarve. Originally the building was erected to dwell the workers from the fish canning industry that was expanding in the region in the last quarter of the XIX century.

Since that the building was kept in the same family and has survived to the touristic boom since the 1970's. The fast growth of the city has transformed the cityscape from an average of two floors to more than six floors in the last forty years. The building has a squared footprint and all facades free; two for the street and other two for a courtyard.

The strategy for the intervention was to keep the original support walls much as possible, and extend one extra floor in the roof. To archive this, was used a structural light steel framework system for part of the first floor and for new second floor.

The original space distribution revealed a simple frame organization along a corridor that crossed the building in half. This organization grid was kept in both original floors. The new floor turns the corridor perpendicular to its original position allowing the roof to lift and bring indirect light throughout two clerestory windows.

The new floor assumes a different finishing material which takes advantage of the structural framework with thinner elements to enhance the expression of the new windows.

The materials chosen reflect cost-efficient strategy where only three materials cover all finishing surfaces: The hydraulic floor tiles based on local colors (blues and yellows) and geometric patterns which covers all public areas and corridors; The wet areas finished with small tiles 10x10cm and an industrial wood panel OSB that is present in every space of the hostel, in furniture, flooring in bedrooms, the bunk beds, the kitchen and the wainscoting.

The program is separated by floors: In the ground floor the common areas; reception, common kitchen; lounge area and a bar. The first floor holds the mixed dorms with shared bathrooms; and in the second floor holds the double rooms with private bathrooms. The blue exterior shutters announces the reception and the bar entry from the street. 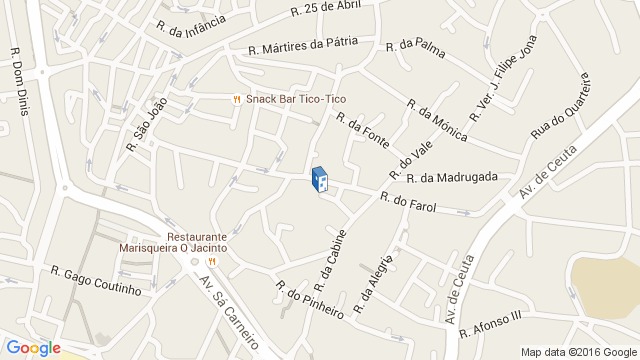 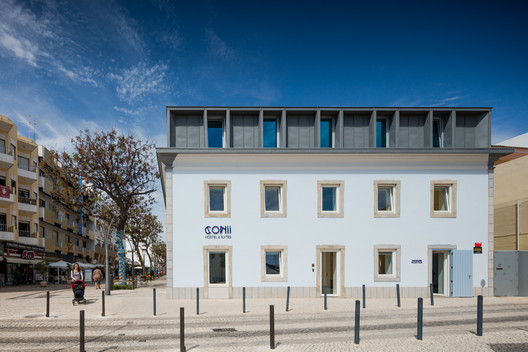