The group’s Latin name translates to “Squaring the Circle” which is a metaphor used to describe a task that is believed to be impossible—a striking name for a group dedicated entirely to “designing temples for the people of today.” However, with their proposal for a Russian Orthodox Cultural Center in Reykjavik, Iceland, Cuadratura Circuli demonstrates that it is not impossible to link the art of the past and the culture of the present. 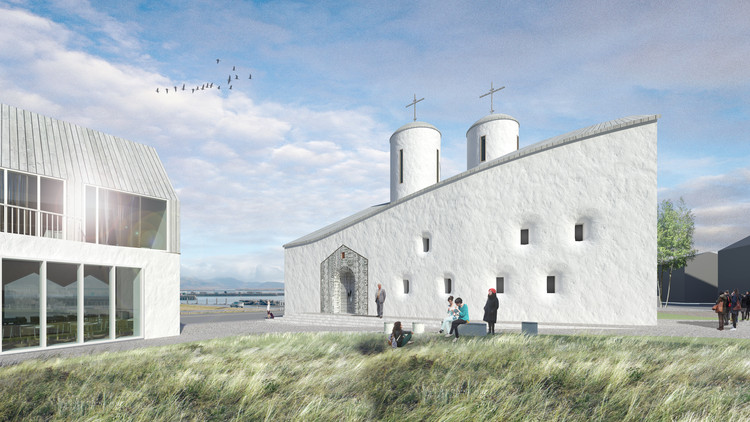 While the project is a possible catalyst for contemporary religious Russian architecture, the project’s local context also makes the project a catalyst for civic liveliness in the area. Situated only 700 meters away from Reykjavik’s historic core, the proposed Russian Orthodox Cultural Center includes a church, a baptistery, and a multi-purpose parish house. The site borders a residential zone and an old port territory which is also going through redevelopment. The Cultural Center is imagined to be a social hotspot and thus one of the agents for change and improvement in this area of Reykjavik.

The proposed design combines the composition of a traditional Russian church with the minimalist Nordic aesthetic. In this symbiotic union, the architects used regional factors such as climate, sun exposure, and landscape to determine which elements to adopt from both cultures. The Parish House for example, is a nod to tradition. Its lower floor functions like a traditional Russian podklet—an unoccupied maintenance or storage room with its cooler temperature. The second floor of the Parish House is more insulated with wood construction and thus provides the accommodation for the center.

For the Chapel itself, the decorative masonry typical of Russian church architecture has been replaced with Nordic purity and minimalism through the use of plain unadorned white stucco walls and a gray wooden roof. Not only does the aesthetic match the neighboring structures in the area, but the stucco also produces a beautiful effect in the low northern sun and complements the landscape of the cold Nordic country.

The designers credit the project’s asymmetrical composition to the ancient churches found in Pskov, a region of northern Russia bordering Estonia, but with its stucco-clad curves the Cultural Center exhibits the same sculptural sweeping effervescence of Le Corbusier’s Notre Dame du Haut. Aside from these formal qualities, the project also emulates the ephemeral interior qualities that are created by the modernist chapel’s irregular fenestration. As Yakubchuk writes: "Small scattered windows… give dimmed light to create an intimate atmosphere suitable for prayer.” But these windows also serve a regional purpose, as they reduce heat loss in the winter and keep in the cool air in the summer.

This proposal interprets Russian religious architecture as flexible and innovative. Consequently, the architects revitalize the image of these buildings and emphasize their relevance in varied applications for 21st century life. In fact, this proposal for the Russian Cultural Center is only one of three other formal iterations. For Cuadratura Circuli, it is definitely not impossible to build traditionally within a contemporary language. 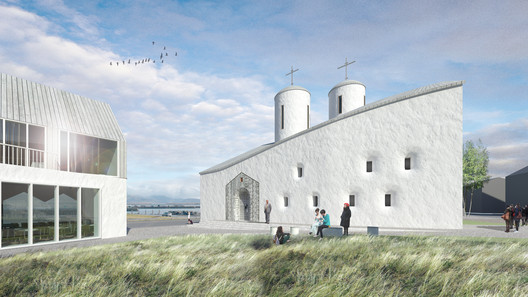