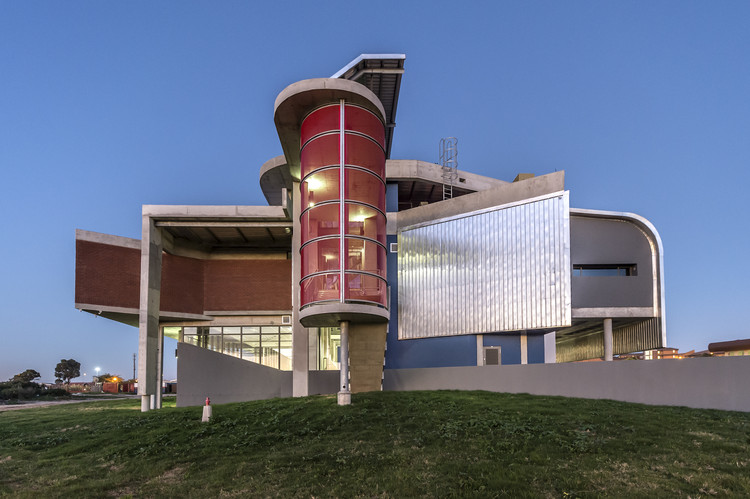 Text description provided by the architects. The competition was won by the Matrix...cc Architects & Urban Designers, whose scheme proposed a structurally playful building that reformed the previously fenced off connection with the local community through the creation of a public square. The inclusion of the building and greater campus into the surrounding context was one of the primary conceptual drivers.

In establishing the spatial massing of the proposed site to hold the space, the design reinforces the creation of a strong pedestrian entrance, defined by the spire of the main administration building, accentuating the axial link between the square and campus.

The creation of a new campus gateway resulted in the programme of the building being split in two, with a ‘Classroom Building’, consisting of central atrium and gallery space linking three levels of training facilities, lecture rooms and computer facilities, and an ‘Office Building’, which hosts the administration, security and staff facilities. A grand entrance canopy, defining the gateway threshold into the campus and layering the transition between public spaces, visually and spatially links the two buildings.

The orientation maximises natural light and ventilation, creating a bright and inviting atmosphere that permeates the triple volume gallery of the building. Serving as the central circulation spine, the gallery links the various classroom, training and computer centres with a range of communal spaces, conversation pits and a generous open atrium at the entrance. This mix of studio and study spaces is further extended to the outside of the building, where generous verandas, external terraces and an embanked grass amphitheatre allow for a range of personal and communal events.

The design is further highlighted by the inclusion of a heavy hanging fascia beam that spans along the upper edge of the building.. Much of the clarity of the structure however resides in the minimised palette of materials employed. Guided by the original face brick design used throughout the Missionvale campus, the building limits itself to off-shutter concrete, face-brick and steel, with accents of painted finishes in the corporate red and blue colours of the NMMU.

Drama in materiality is also created with subtle variations in application and surface; concrete floors are polished to reveal the contrast between the smooth exposed aggregate and off shutter concrete; perforated metal screens designed to enclose the industrial fire escape staircases, while the milled steel roof sheeting to the soft roofs results in a wonderfully textured dappling effect along the southern facade. The colourful mosaic tiles placed on the playful and interactive conversation pit, suspended within the atrium and puncturing the glass facade of the building, create a burst of colour and provide a central focal point. 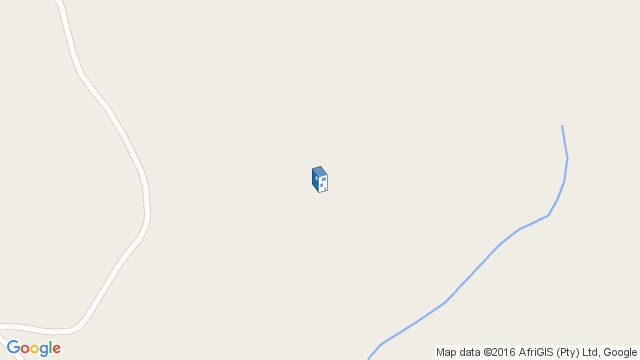 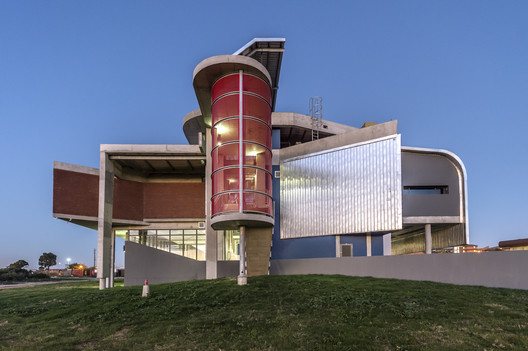