After weeks of movement testing, the British Airways i360 observation pod has achieved its maximum height of 138 meters as the attraction enters final inspection phases in preparation for its opening this summer. As a part of “the world’s tallest moving observation tower,” the 18 meter diameter viewing pod will provide 360 degree views of the British seaside resort towns of Brighton and Hove, the Sussex coast and the English Channel, for to up to 200 passengers at a time.

Designed by Marks Barfield Architects, the minds behind the London Eye and the recently proposed Chicago Skyline Cablecar, the tower was recently named “World’s Most Slender Tower” by the Guinness Book of World Records for its astonishing 41:1 height to width ratio. The structure topped out at 162 meters earlier this year.

The pod’s cable-driven lift system was developed by French company Poma. Other consultants include Jacobs Engineering and Dutch company Hollandia.

As a new icon for Brighton’s historic West Pier, the project will also feature a visitor center, a 400-seat restaurant, a gift shop, a children's play zone, an exhibition area, and conference and event spaces.

According to the architects, the tower "is a feat of cutting edge engineering combined with innovative technology and elegant design [creating] the futuristic visitor attraction on the Brighton seafront." 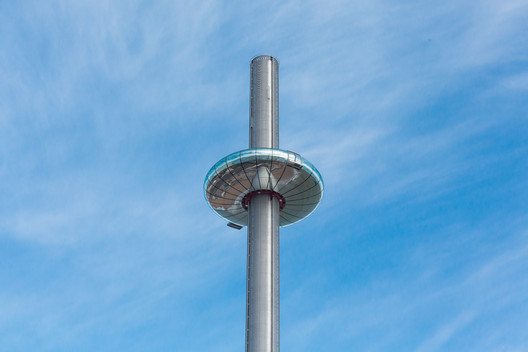