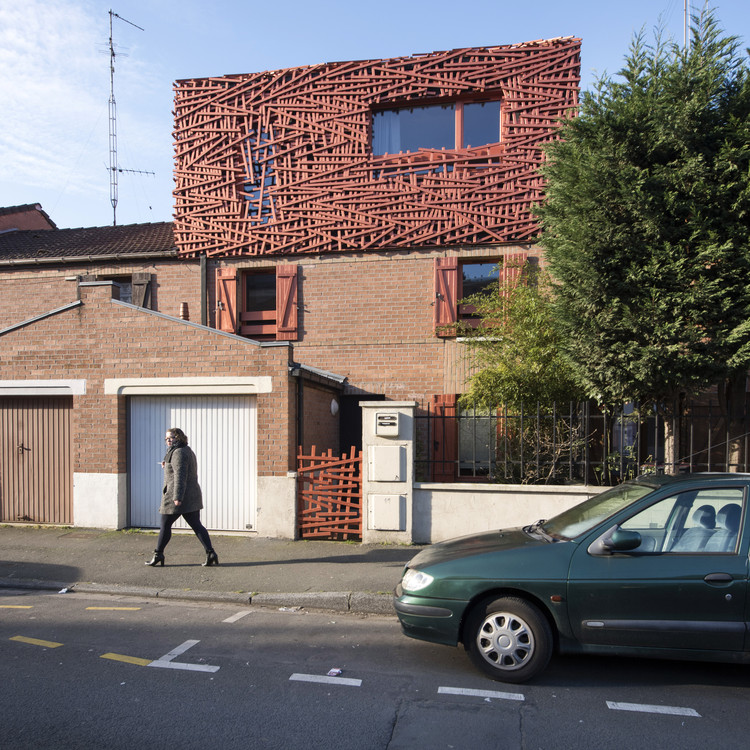 « There’s a blackberry bush of this type upstream to Stamper house, a very dense thicket, so tangled and bushy, that even bears bypass it : around the bones left by deer and covered with moss, and the mooses that get caught up when they try to clear a pass through, stands a wall of spines that seems to be totally impenetrable.(…)

When the spring’s sun used to shine above the blackberry bush, the light would filter through the leaves, enough for Hank to clear path, and he would spend hours on all fours, exploring the feasible ways. »

The residents have prefered to enlarge their home rather than moving elsewhere, as they are in love with their neighborhood. Raised by one floor, the Castor House (Maison Castor ) stands out from a row of brick houses, semi-detached and symetric. As if it has grown overnight, it finds itself covered by a surprising new level wearing a tangle of wooden battens strangely reminding of an animal house.

The elevation, with its simple geometry and proportions, is similar to a Monopoly house : four sides, pitched roof. Recognizable at first glance, it expresses the familiar image of the small house in the urban zones. Painted in red-orange metallic color, the covering, as a superposition of anarchic trellises, covers the added building.

Perched above the roofs and graphically separated from the whole, the volume set gives an impression of lightness. Twigs set down by the wind or brought one by one by an industrious animal, the chaotic hatchings stop short in the roofs alignment of neighboring houses. The adjoining twinning is disrupted, but respected. The harmony is restored by color reminders on the woodworks and the gate.

Simple elevation in appearance, the house transformation is a true rehabilitation. Emptied as a shell, the original façade is used as both a base and a case which welcomes the new building within it. The interior structure offers an enhanced insulation for a better energy performance. The protective effect given by the extension’s  envelope is thus affecting the entire housing.

The elevation has two openings at the front. A clear window captures maximum brightness, while the battens spread over the other window and hide it from inquisitive looks. From the inside, the residents benefit day after day from the infinite variation of the light, as filtered through the branches.

Full of contrasts, the Castor House (Maison Castor) offers a subtle mixture of vegetable and mineral, animal and urban, personal and collective. It appears in total opposition to the urban context: an environment without excess, where the housing is strictly functional. It is also against the current trend, which is to raise by putting in a minimalist parallelepiped on the existing. For both the residents and the architects, the Castor House (Maison Castor) is a gesture of poetry and fantasy, a position statement, a mark of generosity. This is a slightly absurd proposal to enlarge its nest.