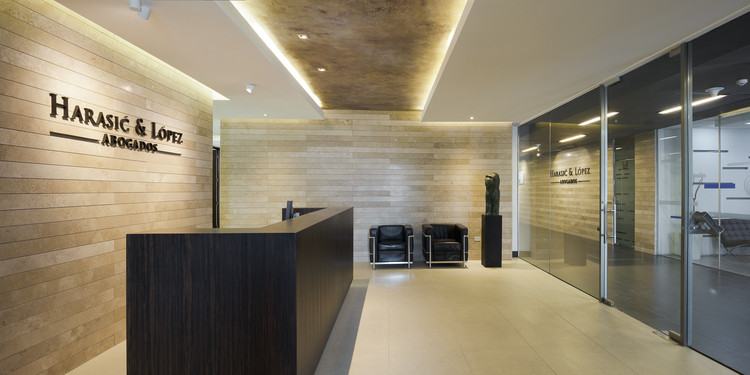 Text description provided by the architects. Harasic y López Law Office is an open 500 square meters floor plan used by the law firm. The office is located on the 19th floor of a prominent building in Nueva Las Condes, a financial highlight district of Santiago. With this Project we explore different concepts such as integration into rigid spaces, lenguage of conservative spaces, hierarchies, recycling and expression of materials.

Working as a lawyer: Because the way of working, lawyers require, isolated spaces for concentrated work. Meetings are less common. This is very typical in both, large and small law offices. This frequently translates into a lot of rooms, corridors and disconnected spaces. In this proyect, to balance out this effect, we thought of a unique central space in which all the offices are organized within it. With this distribution we concentrate walking areas, force and promote encounters between people, and subsequently revitalize the common areas. The layout has a main and wide corridor that goes from north to south, receiving all day the sun from the north. The main meeting room is placed in the north at one end of the corridor, with views on to the Araucano park and theAndes mountains. Inmediately continuing are located partners offices, all of them with the same size and orientation, then associated lawyers and in between some minor meetings room that allow meetings at several points of the office. On the other side of the corridor are reception, library, secretaries desks, attornys, accouting office, dinning room and baths. Despite having different hierarchies of work, all converge inmediately following the personal office door in the same space.

Recycling and expression of materials: The project was executed over a recent rehabilitacion which was no more than three years old. Given the waste generated construction projects, we kept or recycled some elements. For example, the tile floor was in excellent condition and was neutral, though it existed only in the half of the office we decided to keep it and complete the rest of the floor with the same flooring. The same with some parts of the ceiling and columns: in the past, part of a recreation of classic architecture, moldings included, now abstract block covered in wood. To generate a warm environment, we chose a second main texture-material, imbuía wood. Main walls and columns were recovered with dark imbuía wood. Also, frames, doors and furniture were treated with the same materiality. From it, the project has a neutral reading between these two materials. There is a constant dialogue. The reception walls are threated with travertine marble in planks cut with water and mate finishing. The decision of chosing marble was to reinforce the texture of the floor and not to add a third material. The decision of cutting the travertine into planks was exploring excercise to obtain a warm effect, and to give a different scale to the space that was treated mainly with these two neutral materials. To add a hand made finish we keep a space in the middle for fresco paintings.

Into the program there was a special requirement to have bookshelfs for more than 1350 archives plus kardex organizers. In the former office of this firm, these were located in the access wall of each office, hiding the entire interior. To give some transparency and publicity of interior acts we decided to put them in the middle of the back side corridor, designing a bookshelf wall. This bookshelf has a few small windows in between the doors that allows to see through to the other side of the corridor and to have an awareness of the space behind it. The neutral space is also a stage for sculptures and paintings of national artists in strategic points, such as the reception, corridor and main meeting room. 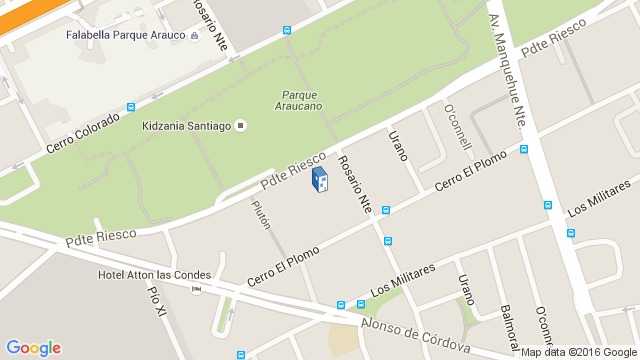