Save
Project of the Month: San Bernardo Chapel

Project of the Month

Stereotomic architecture is characterized by two strong themes: the continuity of the forces of gravity to the ground, into the soil; and the search for natural light, which drills through the massive, solid walls to illuminate and allow habitation by the human being. It’s from these themes that this project takes its power.

Today we present to you May’s Project of the Month, the San Bernardo Chapel, which in its search to transform ecclesiastic symbolism uses nature as a way of ritual expression. The client required a place in a remote location that accommodated religious acts and rituals, in a context in which time is reflected by the use of recycled materials—materials that have been a part of the place for more than 100 years. This established construction criteria based on ancient masonry techniques. However, the project also involved the use of new materials in the interior of the work, creating an interesting play of textures.

Through the careful selection and arrangement of materials the architect creates two key effects: one in which the outside of the building gives testament to the passage of time, and the second one in which a warm atmosphere is produced by the light illuminating the new interior bricks.

The main idea of the project is in relation to the incoming horizontal grazing of light and the projection of the cross on the inside. – Nicolas Campodónico, Architect

The interior vault system—which references the historic coal ovens used to fire bricks in Argentina—is used to allow light to enter without any interruptions, and at the same time to generate a contrast between the red bricks and the shadow created by the beams, forming a cross at a certain time of the day. Alluding to the Via Cruces, the architect brings the elements together with a simple gesture, using nature to complete the project's symbolic element and transforming the architecture into something higher than a human act.

The sensuality of the materials, and how nature is introduced into the project, tells us that this is a place of timelessness; it brings our consciousness into a holy place, where even surrounded by modern architecture it returns to its origin.

How was the design process? What technologies did you use to design form and stability?

The design process was based on certain assumptions, some from the commission itself and others on issues that we wanted to develop. Some of these issues are more specific as those related to the site, and others were more conceptual such as the idea of replacing symbolisms for rituals. The spaces (indoor and outdoor) were conceived and designed to be instruments of the concepts raised. The interior form was developed with analog tools (hand drawings and physical models). The project's location must respond to a given solar position, it was calculated with a physical model scale 1:20 placed in site on August 20, 2011, day of Saint Bernard's day. The stability of the structure was taken from the base of the argentinian coal oven, also called "half orange" although for the chapel, a section of it was removed to allow horizontal natural light inside. This operation is the greatest challenge, both constructive and structural. All this led us to investigate ancient technologies that are already obsolete and try to reconstruct empirical knowledge.

How the arrangement of bricks influence the structure? Can you illustrate with a diagram or detail.

The bricks are arranged in radial way, each brick is directly aligned to the center of a sphere of 6 meters diameter inscribed in the chapel. This spherical condition of the structure lets te structure work primarily to compression. The biggest challenge was to give structural strength to all those parts of the project that were outside of this system. To plan and direct the masonry work we developed a 'compass "(inspired by the table used for coil ovens) which draws a curved level for each course and at the same time gives the slope of each brick so that the small side of it is flat with space.

Beyond the inscribed sphere, as main idea of spatiality and structure, and inspired by the Pantheon, the space's  final composition is the combination of a cylinder section, two straight walls  tangent to it that extend it to the west, a segment of a sphere or a conical dome and vault.

Did you use some form of formwork for the installation of the structure? Is there a photographic record of this process?

The project's main idea is the relation between the income horizontal evening's grazing light  and the projection of the cross inside. For this reason it was very important that the interior surface was continuous and smooth avoid shadows that interfere with the cross. This line of work led think that if we use formwork we were risking to find defects that were impossible to repair later. Remember that under a raking light a few millimeters gap can cast long shadows. We decided to use two associated techniques (Half orange oven and Mexican vault) with which we could build the shell in a self sustained manner and monitor every day progress of it with the setting sun as the shell itself was being terminated and permanently exposed.

What are the structural challenges from using a recycled bricks?

In this case not many, since the interior is the most challenged structurally and is completely done with a new bricks, made of smaller dimensions (5cm x 10cm x 20 cm) taken from the Mexican vault tradition. Recycled brick was used only in the exterior and is larger in dimensions (6cm x 16 cm x 28 cm) and quite irregular because they were handmade. The exterior of the chapel does not have any structural requirement.

The use of two completely different bricks between the exterior and interior enhances the idea that the project  belongs to two different periods. Recycled bricks were already in place, they had belonged to a house about 100 years old which was dismantled a few years ago. We thought that those bricks could stood there in a new way, witnessing the time, they also had a beautiful greenish patina of moss. It was also a way to leverage resources. When repositioned, the lime from the mortar leave them clean, as if they were new, losing the beautiful patina of time they had acquired. What was surprising was that with the first rain the organic material accumulated inside the brick blossomed again as if they have memory and within weeks the bricks gained the centenary appearance again. With the gray-green patina, the chapel seems to have always been there. 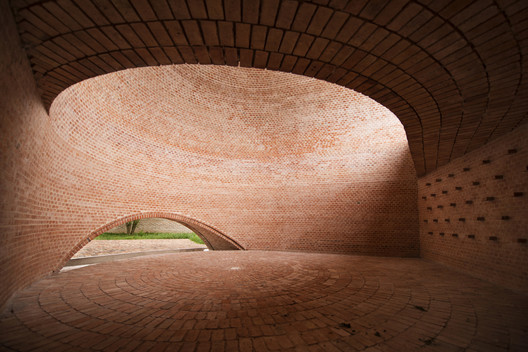