Save
Making Heimat: Inside Germany's Pavilion for the 2016 Venice Biennale
Presented by:

"Making Heimat. Germany, Arrival Country" is a response to the fact that over a million refugees arrived in Germany during 2015. The expectations for 2016 are similar. The need for housing is urgent, but just as urgent is the need for new ideas and reliable approaches to integration. The exhibition therefore consists of three parts: the first part surveys physical refugee shelters - the actual solutions that have been built to cope with the acute need. The second part seeks to define the conditions that must be present in an Arrival City in order to turn refugees into immigrants. The third part of the exhibition is the spatial design concept of the German Pavilion, which will make a statement about the contemporary political situation. Something Fantastic will plan and stage the architectural presentation and graphic design. 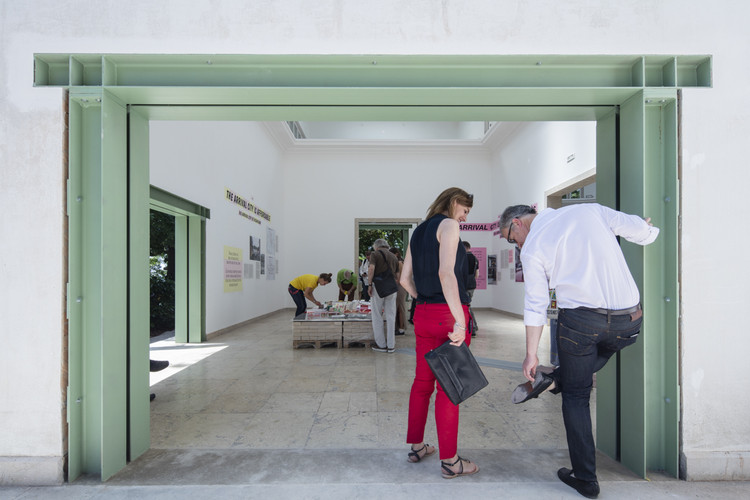 An overview of the three sections of Making Heimat:

1. Launched on 10 March 2016, the website makingheimat.de documents some 35 refugee housing projects that have been gathered by DAM through a Call for Projects since October 2015. The spectrum ranges from temporary lightweight structures that house 300 people, whose interiors have been designed by an architect, to low-cost long-term housing projects, not only intended to house refugees. An emphasis has been laid on wooden modular structures. Yet the scope of the database also ranges from projects initiated by citizen groups to the efforts of a private benefactor to create an estate-like complex for artists and refugees.

The projects on makingheimat.de depict the reality of Germany’s current situation. They are grouped according to size, cost and number of occupants per square metre, material and construction. The database is not a best-of collection nor is it an architecture prize—instead, it’s meant to provoke discussion. It aims to help us compare current solutions and provide a foundation for local and regional policymakers.

2.
Eight theses on the Arrival City were developed in close collaboration with Doug Saunders, author of Arrival City: How the Largest Migration in History Is Reshaping Our World. DAM intends the theses to address the following question: what conditions must be met in Arrival Cities, from an urban planning and architectural perspective, for immigrants to integrate successfully into Germany?

Many of the current refugees and migrants will remain in Germany, as a swift resolution of the war and persecution in their homelands seems unlikely. Together with immigrants who have arrived in Germany by other means, they’re effectively turning Germany into a popular country of immigrants. Yet if we hope to avoid the mistakes of the 1960s and 1970s, it’s essential that these new citizens are not treated as guests, who can be “sent home” at any moment. These immigrants must be given the chance to make Germany into their second home. This is what the title of the exhibition is meant to convey: Making Heimat implies that the stay in Germany will be a permanent one.

Immigrants tend to gravitate towards people in similar situations. This results, unplanned, in the formation of many different Arrival Cities. Doug Saunders defines them in the following terms: “The Arrival City is a City within a City”. Saunders has based his observations about Arrival Cities on his time spent in slums and favelas around the world. Such areas are poor and remain poor, but their turnover rate is high. Many people arrive, but don’t stay permanently. Arrival Cities emerge in urban zones—not through the proportionate distribution of asylum seekers, or under the terms stipulated in a “Residenzpflicht” (residence requirement), a subject currently back under discussion. They offer cheap rent, access to work, and ethnic networks that adopt new arrivals and facilitates their social advancement. In Making Heimat, this model is applied to the situation in Germany. One of the examples that will be investigated is the city centre of Offenbach; another is the Dong Xuan Center in Berlin-Lichtenberg - a Vietnamese supermarket in which everything functions a little differently than what Germans are accustomed to.

The current refugee situation and the demands for an Arrival City converge on an important point: the housing crisis in Germany. We’ve been talking about the issue of low-cost housing for many years; now, it’s time to develop concrete solutions. The situation demands it. We need housing for everyone - and that includes (but isn’t limited to) refugees and migrants.

3.
The Berlin-based team Something Fantastic was responsible for the overall presentation in the German Pavilion. Its three partners Elena Schütz, Julian Schubert and Leo Streich are trained architects. They were chosen by DAM because of their intensive engagement with Arrival Cities, both in their teaching capacity at ETH Zürich and in their work around the world. Their extensive architectural studies of Rio de Janeiro, São Paulo, Addis Abeba and Cairo have been published in book form. Something Fantastic work as architects, exhibition designers, researchers, curators and graphic designers. For the German Pavilion, they have created the spatial concept, and will design the exhibition and catalogue. The design refers to the immediacy and pragmatic visual communication in the Arrival City.