✕
Save
In Therapy: Inside the Nordic Pavilion at the 2016 Venice Biennale
Presented by:

You are part of another’s shadow.
—Sverre Fehn in conversation with Per Olaf Fjeld

A central impetus for this exhibition is to acknowledge the presence of the ‘ghosts’ of Nordic architecture – those architects, theorists and educators—the most famous of which are often described as ‘Modern Masters’—who continue to exert influence on contemporary practice and pedagogy. Indeed, one of the most prominent of these gures, the Norwegian Sverre Fehn, designed the Nordic Pavilion. This exhibition addresses a common challenge faced by Finns, Norwegians and Swedes today: how can a building (or an exhibition, in this instance) exist in a dialogue with its setting when that setting is so charged? For us, this ties into a broader question: how can architecture occupy a legacy while still making progress? 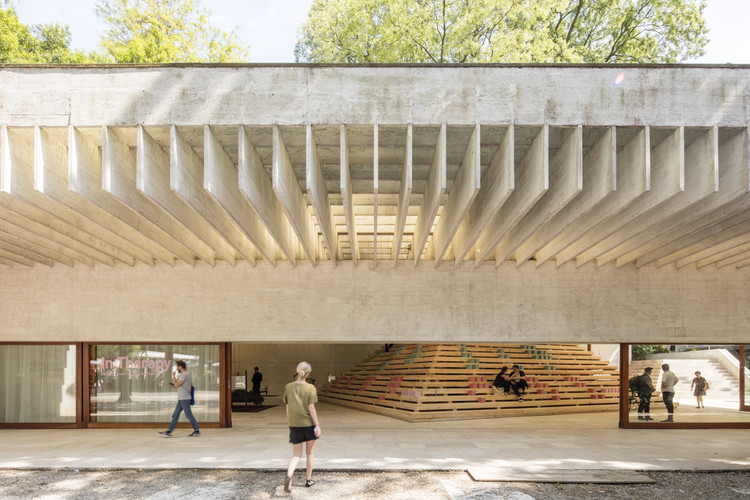 Recognizing Fehn’s original intentions to have the building entirely open, In Therapy treats the Pavilion as an extension of the public space of the Giardini. The central installation of the exhibition—a step-pyramid built using traditional construction techniques from Swedish pine—precisely mirrors the treads and risers of the existing staircase to create a profile-amphitheatre for critical debate and reflection. In other ways, however, it distances itself from the weight of the space in order to confront visitors with an impression, however fleeting, of the state of contemporary Nordic architecture. Here, free from historicism, fundamental questions can be raised: How has architecture over the last nine years developed? Which threads tie them together and what unifying direction, if any, can be discerned? What does it take to be at the cutting edge, trying to conquer new fields? Most importantly: what’s next?

In order to encourage distance, this exhibition isn’t really attempting to be an exhibition at all. It does not demand your full attention, nor does it attempt to deliver its message all at once. It aspires to deflect the monotony of the archetypal ‘stand-and-look’ show by creating a clearing amid the congestion to reflect on the material that’s been gathered and the voices convened. The central installation—the pyramid—is not only an urban artifact but also a display; an inhabitable installation to be investigated and explored. Architecture, at least in the form and quantity that has been convened here, might best be experienced in a state of distraction.[2]

The pyramid itself acts as a vessel, presenting the responses to an Open Call which invited practices from around the world to submit projects they have realised in the Nordic nations between 2008 and 2016. Each practice was challenged to self-categorise their project as either Foundational (defined as architecture that cares for society’s basic needs), related to Belonging (architecture which enacts public programs and creates public spaces, enabling people to become citizens), or in a state of Recognition (architecture which appreciates and reflects upon the values of Nordic society). Each have suggested how their project has—or, indeed, has not—contributed to the current condition of Finnish, Norwegian or Swedish society.

This tripartite classification—which translates here as three coloured bands—is an interpretative take on the structure of Abraham Maslow’s 1954 Hierarchy of Needs, in which he theorised the basic and complex motivational ‘needs’[3] which represent the progress of the individual. Maslow described the pinnacle of his hierarchy, which he diagrammed as a pyramid, as ‘self-actualisation’ (or the realisation of one’s full potential) – achievable only once all the ‘needs’ which underpin it have been satisfied; in other words, each step prerequisites the next. If here the pyramid represents the development of society, architecture can be read as its building blocks.

Here, therefore, the Nordic nations have been placed "in therapy." Although it might appear that Finland, Norway and Sweden are at the pinnacle of the pyramid—having achieved a state-level balance between a capitalist society and the welfare state, revered the world over—they also face complex challenges. From concerns relating to demands on immigration and social integration, to an ageing population and realignment in a newly, or soon to be, post-industrial economy, In Therapy has brought together unconscious and conscious elements (the pyramid of projects and a collection of reflections, respectively) in order to tease out the connections and conflicts between architecture and Nordic society at large. It is architecture—in its broadest role as a spatial, social, and cultural practice—which sits at the center of this discourse.

In this sense, In Therapy is a mirror: a collection of installations which presents the breadth of contemporary Nordic architecture, assembled under one roof, to provide an informed framework for discussion and proposition. It positions Finland, Norway and Sweden—three countries with distinct histories, cultures and attitudes to design—face to face in the context of the compressed world of the Giardini, interrogating perceptions and preconceptions of Nordic architecture by openly addressing its built manifestation head on. 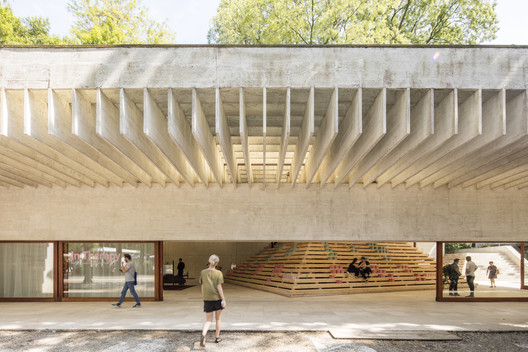