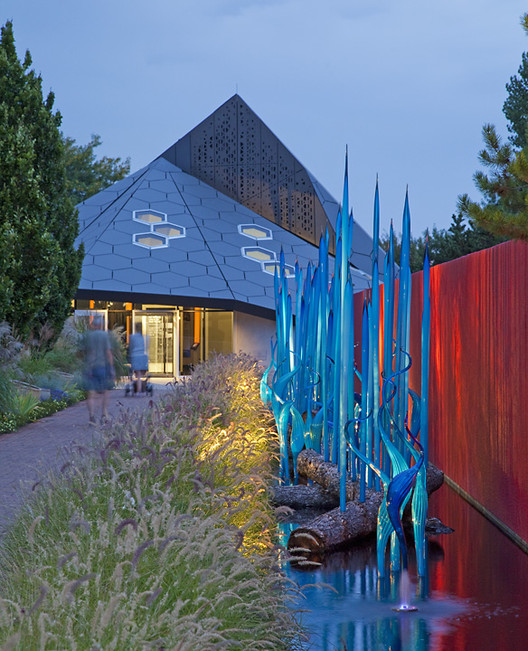 Text description provided by the architects. The Science Pyramid is located in the south central portion of the Gardens' York Street location. Defined by pools of water on the south and west sides, a depressed amphitheater to the northeast, and the El Pomar Waterway to the east, the building's site selection assures 360-degree sightlines when viewed from the rest of the Gardens.Designed to respond to its surrounding environment while bringing a sense of scale appropriate to the site without dominating surrounding elements, the building rests on a square geometric platform from which it risesnearly 34feet to its ultimate shape of a pyramid. The Pyramid is also diagonally divided into two sections and pulled apart slightly to create a visual connection along a diagonal axis with the existing Four Towers water feature on the southwest corner. The Pyramid's entry from the El Pomar Waterway, leads visitors to and from the building along a tranquil pool of water defined by tall vertical walls on each side. At the entryway, the building's skin is raised, forming an eyebrow over the threshold along the east façade.

Biomimicry was the dominant theme guiding the development and formation of the Science Pyramid's design concept. Like a form emerging from the earth, the building portrays a dynamic, spiraling movement that symbolizes how tectonic plates push upward to create something brand new—in this case, giving way to a building that holds new life and knowledge at the Gardens. To further the concept, its building envelope or skin, imitates nature by shielding itself with hexagonal-shaped honeycomb cladding designed to protect the interior from rain, snow and wind, as is the nature of a beehive. The interior space and exhibits inform visitors to see the world of plants through a scientific lens.

In response, Denver Botanic Gardens' request for an iconic Science Pyramid to showcase their science work and a number of broader concepts such as global climate change, the Burkett Design team responded with a pyramid that mixes glazed and opaque systems. Further, rather than propose a conventional four-sided pyramid structure, the form was split and tweaked to respond to the Gardens' circulation corridors, incredible surrounding landscape and daylight. Stretching the form also provided space for important functional requirements such as mechanical systems. Much like how the sides of a pyramid lean on each other allowing it to perform like a three-dimensional three-pin arch, the Science Pyramid’s faceted sides meet at the “spine,” a glazed ribbon of skylights cutting diagonally through the building’s footprint. The skin of the building derives its geometry from early structural concepts using hexagonal shapes derived from honeycombs to establish rigid diaphragms.

The Pyramid's technologically advanced, high performance skin (façade), designed by Studio NYL, is clad in four-foot-wide hexagonal-shaped ventilated Swisspearl fiber-cement panels that mimic the geometric efficiency of nature's wax honeycombs. Thirty panels feature photovoltaic collectors tasked with gathering energy for interior exhibits. In addition, the central portion of the structure and multiple glass portholes are constructed of electrochromic glass, which adjusts in opacity from clear to 97 percent opaque throughout the day, based on solar intensity, or at the flip of a switch as the building's program requires. At sundown, the windows lighten to reveal the building's colorful interior exhibits and exterior flora nearby.

The Science Pyramid has four layers to its structure and shell. The first layer, or primary structure consists of steel pipe elements which lean and balance themselves onto the “spine” of the building as noted above. The structure provides for a column-free interior to the “pyramid” and a primary structure that sheds all the vertical and lateral loads on it through flexure and axial loads through the pipe members. To avoid the costly and difficult to fabricate “fishmouthed” joints, the pipes with “T” and “K” intersections are square cut with simple “H” and “A” shaped connection elements, which saved considerable cost and schedule.

The secondary structure is composed of six-inch hollow square structural shapes and six-inch light gage studs specifically arranged to meet the cladding systems geometry. It is also supported by slender rods to permit the ceiling to float over the primary pipe structural members.

The final two layers make up the Pyramid’s technologically advanced skin (façade), designed by Studio NYL. A continuous layer of rigid insulation sits outboard of the secondary structure with an air barrier system directly adhered to it. The building is clad in four-foot-wide hexagonal-shaped ventilated Swisspearl fiber-cement panels that mimic the geometric efficiency of nature's wax honeycombs. They are mounted to a rail system held above the insulation and weather barrier with fiber reinforced polymer fasteners that thermally separate the outer skin from the interior structure. 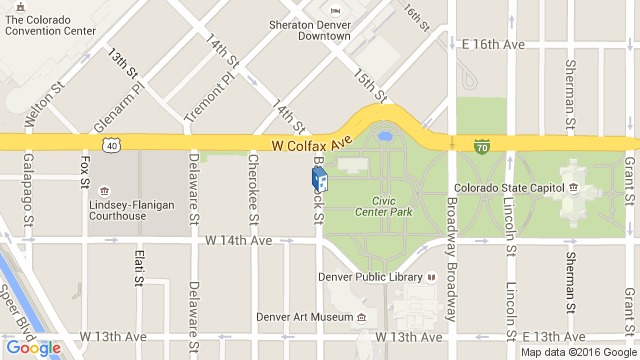