The Victoria and Albert Museum has unveiled its latest installation: the Elytra Filament Pavilion, a project displaying the culmination of four years of research on the integration of architecture, engineering, and biomimicry principles, in an exploration of how biological fiber systems can be transferred to architecture.

The 200-square-meter structure is inspired by lightweight construction principles found in nature, namely "the fibrous structures of the forewing shells of flying beetles known as elytra," states a press release.

The pavilion’s canopy is made up of 40 hexagonal component cells, each weighing an average of 45 kilograms. These cells were constructed over a four-month period by a robot at the University of Stuttgart and assembled on site at the Victoria and Albert’s John Madejski Garden.

Elytra will grow and change in configuration over the course of the Victoria and Albert Engineering Season in response to anonymous data captured by real-time sensors of how visitors use and move under the canopy. Data will be mapped and available online throughout the season, and on June 17 and 18, and September 22, "visitors will be able to see the pavilion evolve as new components are fabricated live in the garden by a Kuka robot."

Overall, the pavilion will be made from glass and carbon fibers using a new robotic technique that entails the winding of composite materials by a robot arm.

News via the Victoria and Albert Museum. 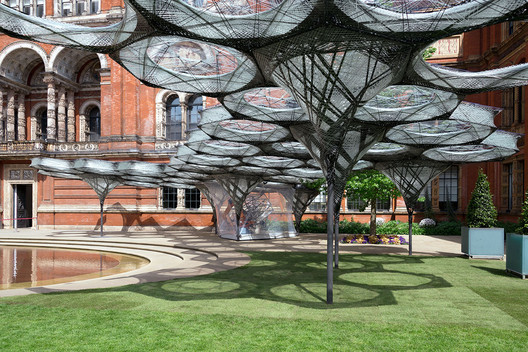