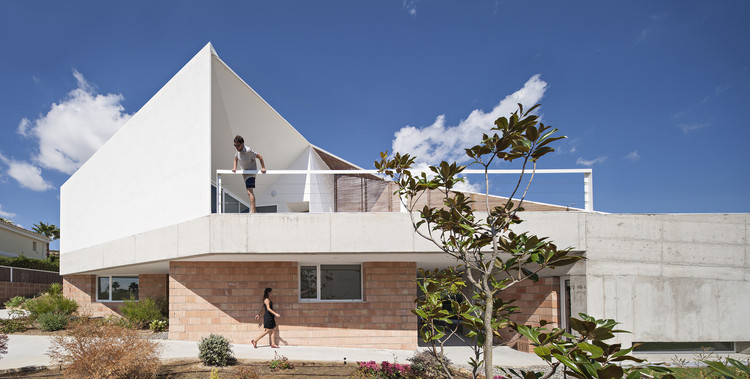 The final project of Casa de Los Vientos arises in 2012, after dismissing a greater previous project for economic reasons. The new project required to cut off the building cost up to 600€/m2 as well as to reduce the floor area while keeping the basic need program for a holiday home for a four member family, three generations included.

As an architect, the challenge was exciting: creating a new project to build a home as decent as the prior proposal for the same family, in the very same place and starting with three times less the budget planned for the initial project.

The new project is approached as an answer to the place and the expectations of the users in terms of leisure, comfort and economical adjustment. To do so, the following key principles were highlighted in the project and during the construction:

a. The shape emerges from the orientation, from the prevailing winds and from the premise of enjoyment of the outside spaces and their views.

b. Honest architecture and material honesty are accepted.

c. Austerity in terms of means is assumed and beauty is found in the inexpensive.

The built-up volume and the spaces’ geometry arise from the orientation, the logic of prevailing winds and the views to the sea, the peñón de Gibraltar, Morocco and the Sotogrande beaches. The result is a two floor house, minimal and necessary in the inside, and offering a maximal use of the outdoor spaces. A sort of porches, terraces, windbreak walls and balconies shape a volume offering outdoor spaces to be used all days of the year, depending on the direction of the winds.

The resting spaces are located in the ground floor. The upper level hosts two outdoor enjoyment spaces. On the one hand, the Terraza de Levante, which occupies a horizontal platform with two benches and the pool, SE oriented. The form of this volume protects it from the Poniente, the prevailing and colder wind of the area. On the other hand, the Terraza de Poniente is located on the roof and protected of the Levante wind by a windbreak wall. The views from this terrace open over the peñón de Gibraltar and Morocco.

The structure of the building is developed on the basis of load-bearing walls made of honeycomb clay blocks and reinforced concrete, both exposed in the ground floor and reinforced in central points by means of concrete pillars. First floor volume is made of a structure of reinforced concrete in pillars and slab in roof and enclosures, also made of honeycomb clay blocks. As these are more exposed to the winds, they are coated with white-coloured waterproof rendering mortar. The good weather conditions of the place allow the use of 29 cm tick thermal clay as enclosure, without needing more insulation reinforcement.

Both indoors and outdoors, honesty has been at the core of all construction choices. The thermal clay and concrete wall structure shows up sincere, creating interesting contrasts with the painted plaster of the partition walls inside. This contact, expressly highlighted, creates a dialog of materials showing all the phases of the construction process.

Due to the strong budget restrictions, both for the project and the construction, an exhaustive exercise of management and economic monitoring was assumed and required from the beginning of the creative process of the intervention.