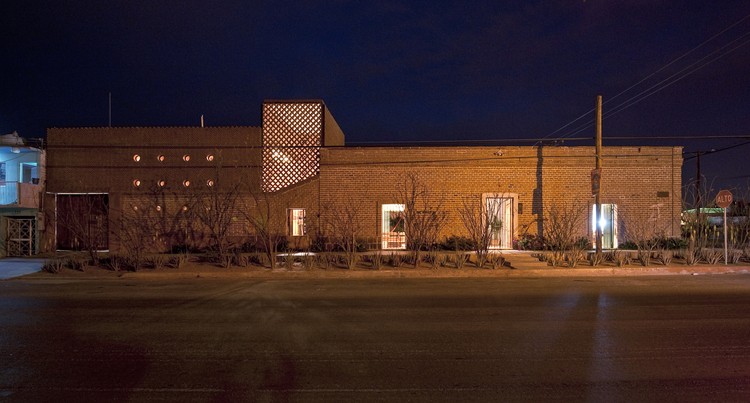 Text description provided by the architects. Since the eighteenth century , the urban layout of La Paz remains constant. In the early nineteenth century had a greater development defined typology and morphology. Currently , it is a space that still retains a significant portion of its historic buildings , sobriety and constant examples sencillez.La remoteness from major mainland cities and isolation in general as a result had an apparent delay in the physical transformation of La Paz to the Porfirian era when he received a strong influence of afrancesamiento driven by Diaz. It should be noted this trend in the use of the overcooked septum schemes middle courtyard and verandas using flared at the ends , as well as aversion to services integrados.La orthogonal layout of the city in batches of 150 yards , which defined both the scale and the size are worth appreciating today , even with family subdivisions that look all the time.

The house septum La Paz, located six blocks from the boardwalk, in a residential area of the era of Porfirio Diaz, has three bays and some annexes ( kitchen and service ) as well as some elements of later times lets affecting historical scheme, so the first thing was: rid the building of its anachronistic additions, to restore it in the manner authorized by the INAH, based on the letter of Athens.

When starting this work we found that had different uses over time : first, housing was, then, a primary school and eventually became a brothel. Such uses an image created in memory and still remember some recent atrocities that occurred in the house . In fact, to ask the neighbor to allow us to repair the adjoining fence we had to send an architect woman, and did not get us, who narrated memories connoted only supports have heard in a sleepless night.

When restoring the main corridors were not only the well and the original kitchen, but the old blackboards thirties obviously belonging to school age. In addition, we did our best to restore the original spirit of the property in respect of the street. Thus, we proposed to buy a batch that had been lost, which we, along with exceptional tamarind. Unfortunately it is the last house on the block that still has these features, but to restore it evoked the memory of former neighbors .

The new space required composite elements : residential use and office space, it determined that the functions were divided into sections to create intimacy between the different areas and architectural themes .

The old building for offices or law firms are retained, then the kitchen and foyer, which use shared this with the stay was also started . To give drive, the path is restored based on existing traces, arming it with palm. This was extended to the new bay in order to give unity both use morphology also a second level for contemporary annex was designed with space game and, as a driving link, the master bedroom is located on the ground floor and services at the top end, which helps cushion the boundary with independent access.

There is a pool emerging from the garden floor as sculptural remnant, evoking the ancient troughs of the services of the houses of the period .

In this project resulted critical materials such as annealed red brick, and the proportions of the spaces . The partition - particularly his red- served as a binder and unique theme typological unit.

The idea was not to cut the septum and not use the traditional way, but do it in different ways to define the personality of each space. It was the type of partition respect the historic building, but inserting elements of contemporary design and local materials.

The result of the strict combination of materials, with proper use, both in proportion and expression, resulting in this creative exercise a plastic travel between the different textures and shapes, enriched by aesthetic rigidity as based on color a dialogue that travels in time, upsetting the different elements of memory.