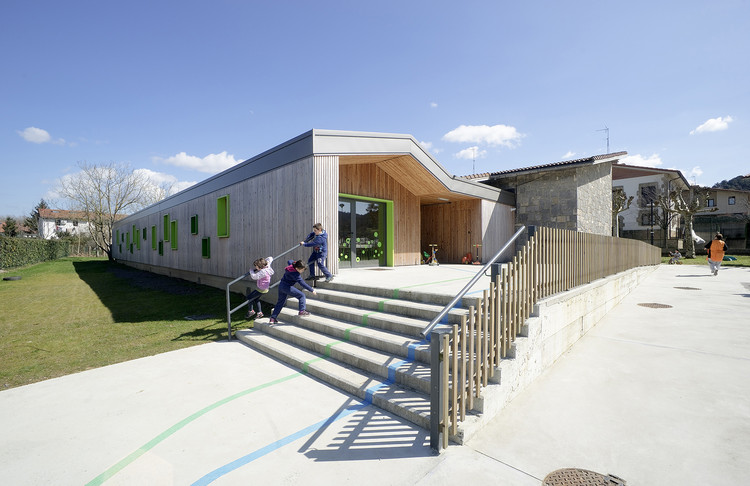 Text description provided by the architects. The project to build an extension on to the nursery school in Zubieta (Ikastola Zubieta) was designed at the request of Donostia-San Sebastian City Council, given the need to increase the number of classrooms and solve the construction and quality deficiencies displayed by the various prefabricated modules where classes were being given on a temporary basis and where the dining room was located.

The challenges that the project needed to address were as follows: to integrate the intervention into the existing building and the rural landscape in which it is located; to improve the functionality and energy efficiency of the building; to provide the whole with an image allowing it to be easily identified as an ikastola (Basque-medium school) or school for children; to limit the completion of the work to one school term.

The solution proposed called for an adjoining timber unit positioned along the length of the existing building with a profile of one floor only. The arrangement of pitches for the roofs and the combination of windows on the façade at various heights, and in various sizes and colours in shades of green and the timber finish were the tools that succeeded in turning the idea of the project into reality.

The design and layout of gaps addresses the aim of providing a high degree of natural light, and splashing the timber volumes with elements of colour at different heights allows the children to have lines of sight through them. The exterior cladding of the roof comprises light-grey metal sheets, thus giving the roof a sense of lightness and light and providing it with a neutral character within the urban environment. The porches at the entrance to the buildings are formed by the roof itself as it continues its own fractured profile, and by the two vertical wall sections where the slats of the timber panels open, thus creating a visible filter.

The distribution proposed for the ground plan allows systematised, off-site construction to be carried out to address the need to complete the works as quickly as possible, between September and December. That is why, apart from the foundations, nearly all the units of the works are prefabricated, with the use of prefabricated CLT panels a distinctive feature. These panels form façades, interior partitions, roofing and exterior cladding. They are made to measure off-site, which means that the actual on-site execution can take advantage of easy assembly and be carried out in a fast and systematised way. 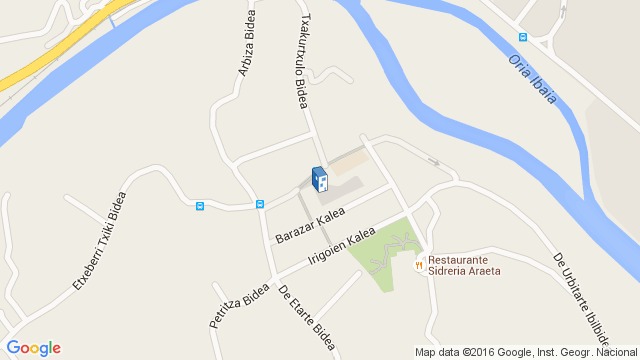 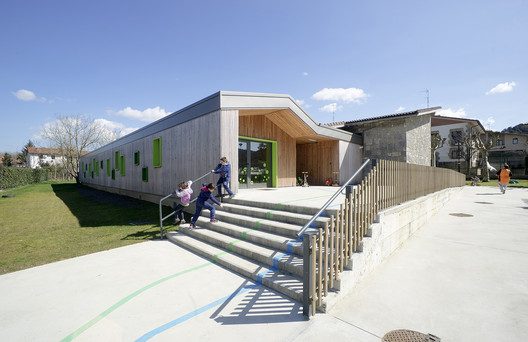