Save
"Home at Intersection": An Exploration of Relationships, Individuality and Architecture
Share
Or
Copy

What do we mean when we say that our homes are “extensions” of ourselves? To put it more precisely, can a home be an extension of more than one person’s sense of “self”? And what happens when a single building is expected to be a home for two very different people? These are the questions asked in the project “Home at Intersection” by Netherlands-based architect Yushang Zhang.

Developed as a personal project in Zhang’s spare time Home at Intersection is, at its heart, as much a story told through architecture as it is an architectural design. The story chronicles the relationship of two young lovers as they embark upon a new chapter in their life together, building and then inhabiting their dream home. But much more than that, the project investigates themes of individuality and social bonds, using architecture as a medium to understand our hidden emotions. 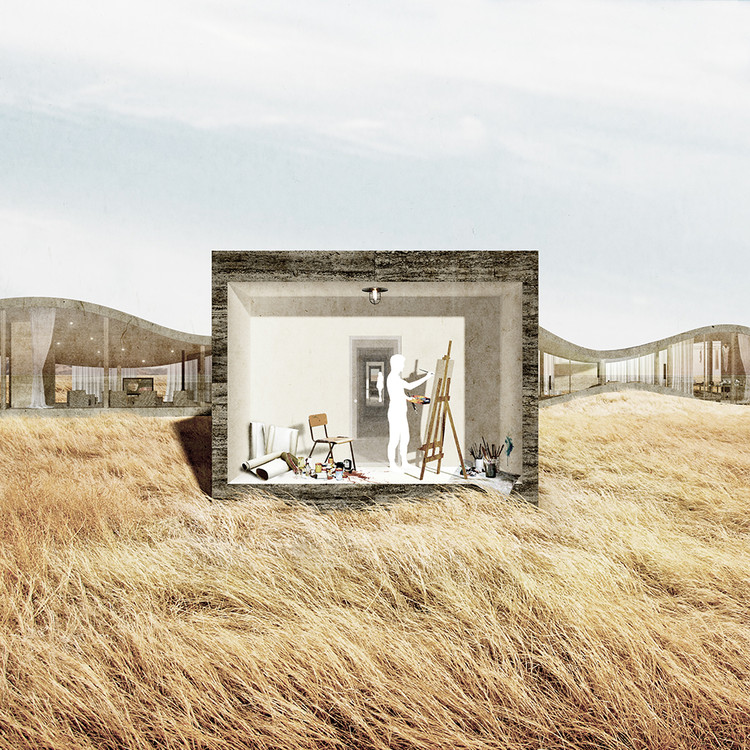 This story-like approach to architecture is nothing new: in particular, it is reminiscent of the work of Studio Weave, who often combined architecture with whimsical storytelling. Take for example their design for Freya and Robin, a pair of cabins set on a lake in which Studio Weave sought to “create evidence of an imagined fairytale.” For this design, the love story of Freya and Robin influences the architecture as much as the architecture influences the story; Yushang Zhang’s work is much the same, in spite of the fact that it is an unbuilt design.

Zhang’s story (which you can read in full here) begins in a humble setting:

The two protagonists of this story, Fred and Sofia, used to live together in a simple little house... The interior wasn't spacious but it made a cozy home. In such a narrow space without any partition, they almost became each other's air.

However, once they start to plan a new home together, Fred and Sofia happen upon the uncomfortable realization that they are an example of the idea that “opposites attract”: their opinions differ on what rooms their new house should have and the architectural style of the space itself. As a result, they happen upon an unusual solution, a cross-shaped house composed of two entirely different architectural entities, with each of the inhabitant’s every wish for their home satisfied by one of the two volumes. Each volume is long and thin in order to offer the best possible views, and where the two volumes intersect are three rooms which they share, a bedroom, dining room and “memory room” holding mementos of their time together.

The formal resolution to the problem that was self-imposed by Yushang Zhang is certainly intriguing. Stripped of any context—the house is, it seems, set in an endless wilderness—it is a fit-for-purpose design that visually represents nothing more than the requirements of its inhabitants. In a way it is reminiscent of the effortless diagrammatic approach of firms such as BIG, in which any given input creates a logical output in terms of form.

Yet despite this seemingly ideal design, Fred and Sofia soon find that the sense of individuality offered by the new house causes them to drift apart. As their schedules begin to involve less of each other they find less common ground, and less of a desire to occupy the communal space at the intersection point of their home.

This sad, slow separation is underscored at the end of the story when Fred waits for Sofia for hours in their shared dining room, only to then realize she has, without telling him about it and without him even noticing, extended her part of the home right out to the horizon. Zhang concludes:

The amplified personal identities, the unrestricted freedom and the insatiable desires can turn a home into a tiny intersection point of two utterly different and extremely busy lives... Over time, when the intersection point loses its gravity and we move too far on our own tracks to meet each other again, home doesn't exist anymore.

Yushang Zhang’s story is certainly no Shakespearean tragedy, and at first it may come across as overly sentimental and more than a little naive. But it nevertheless offers a poignant lesson for architects, giving a new perspective on the ideal of user-oriented design. The people we design for are complex and multilayered, and often our jobs as architects should be to recognize those desires that shouldn’t be met in designing for them. The logical solution to a problem may in fact bring a set of intractable problems of its own.