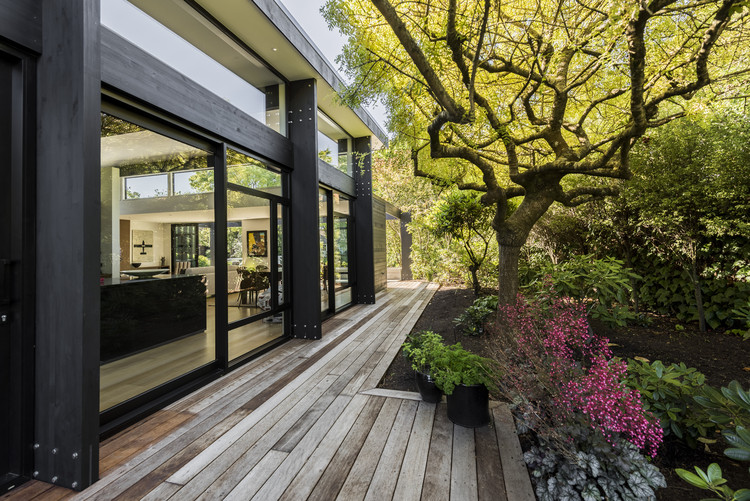 Text description provided by the architects. This home sits on a tree lined cul-de-sac in Fendalton, Christchurch; adjacent to the Wairarapa Stream. It was designed to replace a home lost in the 2010/2011 earthquake sequence.

Our brief was to create a contemporary environment that was light and open, embracing the stream aspect to the north and existing garden to the east. This, along with our client’s admiration of mid-century modern architecture (in particular Eichler’s Homes), was to inform the architectural language of the home.

The home has been carefully located in the general foot print of the original home allowing the extensive eastern tree lined garden to be retained. Spaces have been organised to allow the planting to have a strong visual connection to the homes interior.

Architecturally, our design anchors to the notion that no structural steel was to be used. This ‘rule’ was established during the design phase, initially to control the architecture and to guide the aesthetic and materiality. During the course of the project it became more of a narrative to engage all those who worked on it!

The home comprises of a gentle sloping roof plane resting on two dark, horizontal cedar board masses. Five structural timber portals span the width of the home creating a grid like exterior and a rhythm of timber to reinforce the language of the home internally. This grid is generally glazed to allow light to permeate enforcing the geometry of the low slung roof.

The home has been orientated to connect the primary living spaces to the northerly river view. A large court to the east provides private outdoor living and amenity to both the living and the sleeping quarters.

The home is planned in an ‘L’ shape around the east court. A central corridor bisects the home creating east and west oriented private quarters and linking occupants to the stream view as they navigate the home.

The home’s living spaces are organised to provide the intimacy of day to day living for two and for larger groups while entertaining. One particular feature is the kitchen space which has been divided into two zones; the functional ‘back kitchen’ and the social ‘front kitchen’. This allows our client to work undisturbed and without the concern of a tidy appearance, while their guests enjoy a Pinot or a Whiskey in the heart of the home! 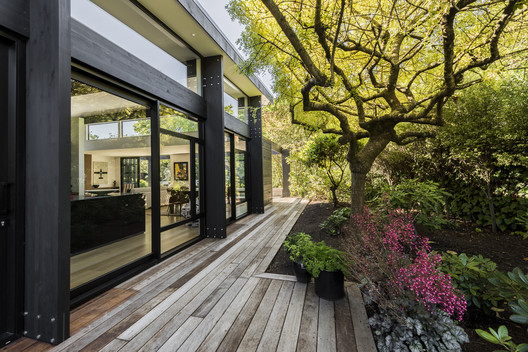