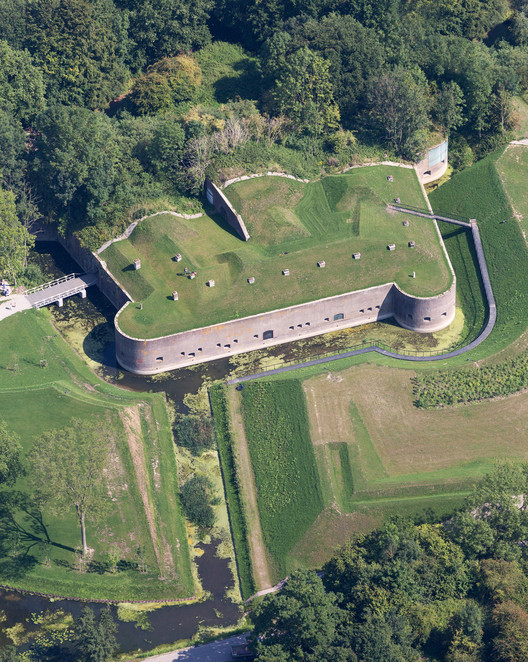 Text description provided by the architects. In 2015 the Waterlinie Museum at Fort Vechten opened its doors to the public. The new museum and landscape design is "a major cultural highlight in 2015," said Mariette Pennarts, deputy of culture in the province of Utrecht.

The two-hundred-year-old fort is part of the Nieuwe Hollandse Waterlinie, a 85 km long military fortification which has been nominated in 1995 for the UNESCO World Heritage list. In this anniversary year, the fort will serve as Waterline Museum to the master plan by West 8 and Jonathan Penne Architecten. Anne Holtrop designed a new pavilion, which is similar to the original bunkers underneath a grass roof.

It is an ingenious system of dikes, locks and fortresses built in the nineteenth century to keep the enemy at a distance by flooding a 3,5 kilometer wide area. The Waterlinie decayed in recent years, including the vegetated construction of Fort Vechten, which then settled various kinds of rare plants and animals in the course of time.

The narrative intervention of the developed masterplan is not only easily recognisable from the air, but also from the roof of the fort. An eighty-meter wide strip in which the fort is returned to its original, clean geometric condition of around 1880, stretches 450 meters long across the landscape.

The huge dimensions of the fort are also explained by a narrow intersection of the six meter high earthen rampart surrounding the fortress. This cut together with a narrow bridge over the canal makes the the new outdoor museum accessible. The fort is free to the public, and spread over the terrain there are some hidden treasures. There are trails outside the fort, the upper fort, there are several buildings made accessible, there is a cable car and a raft over the moat. Besides the historic buildings there are also new additions, including the pavilion of Anne Holtrop, which folds a 50-meter-long model of the Waterlinie, which visitors themselves can flood. There is also space in the masterplan for topics outside the waterline, like the national forest association, an important partner to explain the special nature, and the Roman Limes.

Penne Hangelbroek has been involved since the beginning of the process, first as a responsible partner of Rapp+Rapp then from Jonathan Penne Architects. He says: "The masterplan consisted in the strip that we then have meticulously restored. This included buildings, bridges as well as reconstructing the earthworks. But we had also determined the location and architect of the new pavilion. Finally we where given a lot of freedom from the content of the exhibition to way finding plan."

Now this unique piece of historic landscape has been brought back to life. 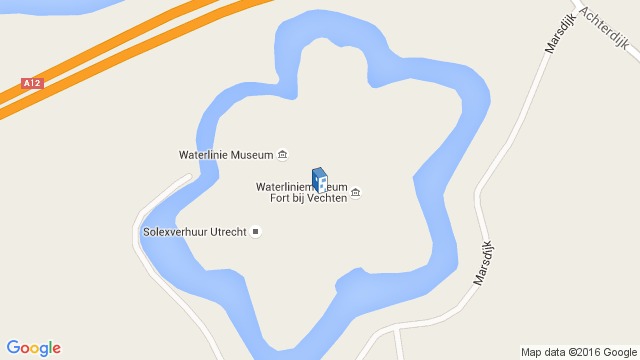