The Royal Institute of British Architects (RIBA) has announced its longlist of 30 buildings to be considered for the inaugural RIBA International Prize. According to the organization, “Projects range from large urban infrastructure schemes to private residential projects; cultural destinations to civic spaces; academic buildings to places of worship. The RIBA International Prize will be awarded to the most significant and inspirational building of the year. The winning building will demonstrate visionary, innovative thinking and excellence of execution, whilst making a distinct contribution to its users and to its physical context.” This is the first RIBA Award to be open to any qualified architect in the world.

The 30 long-listed buildings will be visited over the summer by the RIBA awards committee, after which, the list will be reduced to 20 winners of RIBA Awards for International Excellence. Subsequently, six finalists will be chosen and visited by a Grand Jury in the fall. According to RIBA, “[Awards for International Excellence] will be given to buildings worldwide that stretch the boundaries of architecture. Irrespective of style, complexity and size of both scheme and budget successful projects should demonstrate visionary or innovative thinking and excellence of execution.” The Grand Jury is being lead by Richard Rogers and includes Billie Tsien, Kunlé Adeyemi, Philip Gumuchdjian, and Marilyn Jordan Taylor.

“It is a huge honour and responsibility to consider work for premiation," said Billie Tsien. “Of importance to me personally is the opportunity to recognize work of integrity, both aesthetically and in the value system under which it is made.”

For this inaugural year of the RIBA International Prize, buildings entered for consideration were completed in a three year period (between January 1, 2013 - February 1, 2016), but in subsequent years the prize will consider buildings completed only within two years. RIBA has been giving architectural awards since 1966, including the Royal Gold Medal, RIBA House of the Year, and RIBA Stirling Prize. The winner of the latter will represent the United Kingdom in the International Prize.

“We have been delighted with the response to our inaugural RIBA International Prize, which has brought a huge range of exceptional entries from all around the globe,” said RIBA President, Jane Duncan. “It will be fascinating to see insights from the judges and entrants into the power and value of great architecture, wherever you are in the world.” 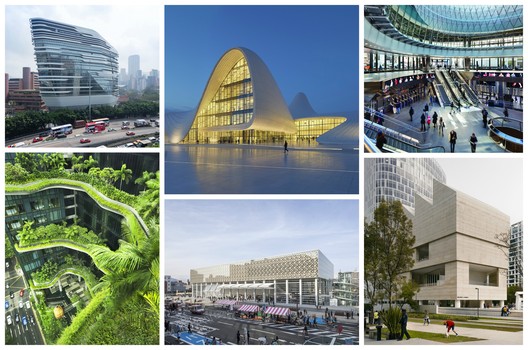