In anticipation of the upcoming 50th anniversary of Expo 67, Studio Dror has proposed a 150-meter-wide vegetated dome for Park Jean Drapeau, the original site of the World Fair. The new dome would complement Buckminster Fuller’s Biosphere, which was built as the US pavilion for Expo 67.

Following a tour of Île Sainte-Hélène with the Buckminster Fuller Institute, Studio Dror was inspired to propose the new dome as a partner for Fuller’s "lonesome structure."

“Interacting like the sun and the moon, our concept engages in a poetic dance with Fuller’s design, realizing the park’s potential in a contemporary context,” studio founder Dror Benshetrit said in a press release.

Differentiating itself from Fuller’s original dome, the new proposal’s aluminium structure will also include a vegetated sound buffer. “As with 1967, 2017 is not just another celebration—it’s the opportunity for a new beginning,” Dror Benshetrit said. “Our living dome is a catalyst for dreaming. The possibilities are endless.”

Providing both an iconic addition to Montreal’s skyline, and a backdrop for events year round including music festivals, live performances and public art exhibitions, the space is billed as having the potential to “transform the park into a global cultural destination.”

Structural and landscape specialists have affirmed the possibility of the project, claiming it could be ready to welcome guests in two years. 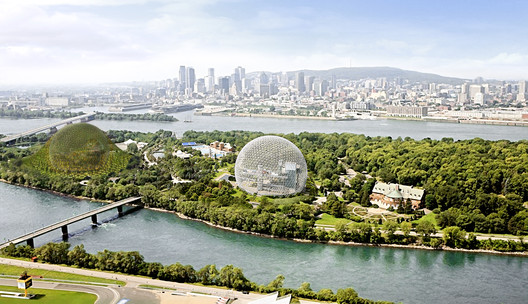