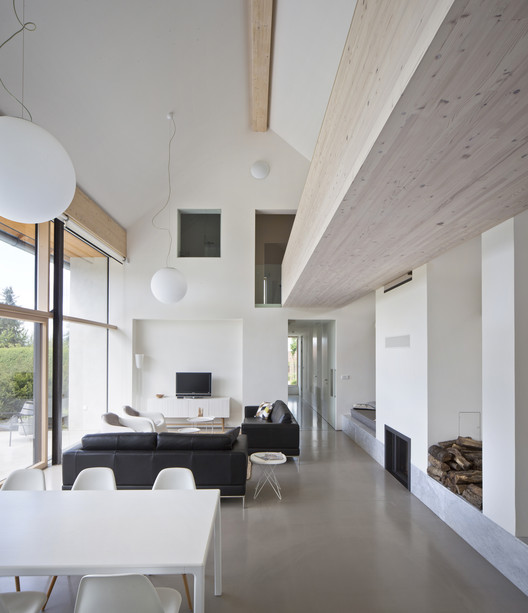 Text description provided by the architects. Set within the rural area, the new-built family house replaced former building of similar shape and footprint.

In spite of architectural inhomogeneity, gradual restructuring and devastation of original historical forms, the atmosphere of the community, especially in the central area is predominantly traditional – rectangular buildings with pitched roofs dominate the built environment. Regardless of the fact that the site is located on the boundary between historical and modern housing, the intention was to follow the architectural principles of former traditional built environment, as advised in the local zoning regulations.

The house of simple traditional shape, similar to the former building in height and size, fits appropriately within its environment. The main living area, situated on the ground floor in the center of the house is open to the height of the rooftop. Large glazed wall opens the central space to the garden. At the same time, light penetrates the interior via longitudinal window in full length of the opposite wall. The living space is defined by transverse walls dividing the space from the adjacent rooms on the ground level and the attic. Full width glazing of the living space creates the illusion of two detached buildings. This illusion is supported by interior windows of the level rooms open to the living space. This principle aims to create the atmosphere of a „living hall“ and relieve the sense of confined space. Whilst opening to the exterior, the atmosphere of being sheltered in between two houses, on a roofed courtyard prevails. The attic dwelling units, situated each on the other side of the house, connected via bridge are hereby intentionally separated.

The northern part of the living space is characterized by contemporary fireplace and a bookcase, behind which stairs to the upper level rise to the center of the bridge.

The bridge, designed as a timber glue-laminated beam (U shape), does not burden the perception of the space, bearing simple appearance of a large solid piece of timber.

With perpendicular relation to the house in the direction to the garden, a garden pavillion is situated. Part of the pavillion is an outside seating sheltered by the roof, the other half (with a basement beneath) serves as a storeroom for garden equipment and furniture.