Save
The 10 Best Architect Designed Products at Milan Design Week 2016
Presented by:

To mark the conclusion of the 55th Milan Design Week (also known as Salone del Mobile), ArchDaily has compiled a list of the best architect designed products unveiled at the event. This year’s notable items include works by Zaha Hadid, BIG, Herzog & de Meuron, MAD, David Adjaye, and Daniel Libeskind, among others.

A faucet created as a response to AXOR’s prompt for designs that "[anticipate the] meaning of water within the living spaces of tomorrow." Adjaye’s ‘Ritual’ design is a bronze trough with a wedge-shaped granite inlay.

BIG for Artemide: ‘Alphabet of Light’

For Artemide, BIG created a new typeface in wall-mounted, light-up letters. Each form is created with a group of simple elements that are connected by electromagnetic joints that become invisible when illuminated. The system allows for any shape to be created, either a letter or not.

Made from polyurethane plastic, Zaha Hadid’s ‘Mew’ table appears to be two interlocking waves of resin, but is actually one continuous surface. According to Saway & Moroni, "Although it brings a successful summary of two distinct surfaces to mind, the Mew table desk starts out from a single enveloping figure to take the form of a futuristic, magically fluid origami.”

Fashioned from granito nero assoluto (fine black granite), Zaha Hadid’s shelving design for CITCO can be mounted as a group of four brackets or broken up into separate units. “Valle is a shelving system finely crafted in black granite that continues my explorations with Citco into the unique properties and performance of stone," said Zaha Hadid.

For their nearly-complete Manhattan skyscraper, Herzog & de Meuron have teamed up with Laufen to complement the tower’s design with meticulously executed bathroom products.

Daniel Libeskind’s ‘Android’ radiator for Antrax is meant to appear like a sheet of paper or fabric rippling in the breeze. An environmentally conscious design, the panels are fashioned from 100% recycled materials and the radiator itself require limited water to operate.

Like erratic pen movements or the scrambling of a stock market chart, Daniel Libeskind’s ‘Time Maze’ disguises an analog clock’s face and function as an intersection of jagged lines.

MAD’s ‘Marilyn’ handle for Olivari recalls the firm’s design for Absolute Towers in Mississauga, Ontario (just outside Toronto). That pair of towers became colloquially known as Marilyn Monroe for their curvaceous shapes.

Nendo’s H-horse for Kartell is a transparent plastic rocking horse inspired by the shape and formal characteristics of I-beams (also known as H-beams). The horse form is achieved by connecting and shaping only three planes of material.

The design of Nendo’s ‘Sway’ table for Marsotto Edizioni plays with the physical limitations of marble by creating tables that appear on the verge of toppling over. According to the designers, "The weight of marble is often perceived as a negative factor, but this element has been actively exploited, resulting in the creation of a table that is tilted to one side."

In a new frontier for the “Internet-of-Things,” Carlo Ratti’s ‘Lift-Bit’ furniture for Vitra is made modular and mutable by the use of an app. Connectivity gives you the ability to move separate stool wirelessly, enabling users to create armchairs, couches, chaise lounges, and just about any other seating arrangement you can think of. 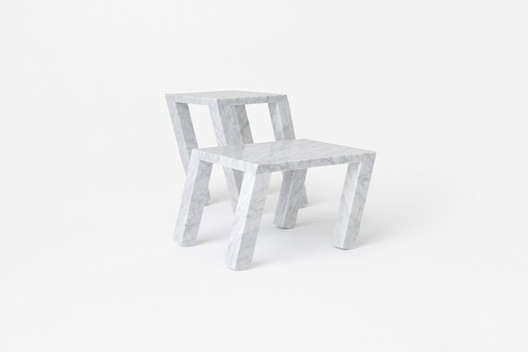