Save
Gottfried Böhm: the Son, Grandson, Husband and Father of Architects
Share
Or
Copy 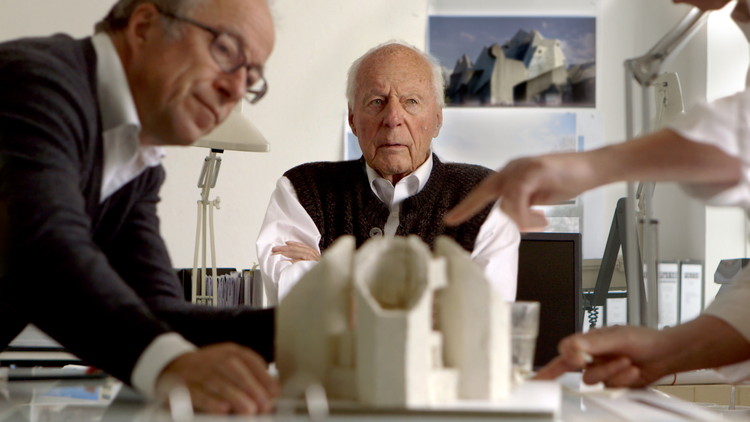 An elderly man sits at the head of the table, arms folded. He looks stern. A middle-aged man is presenting a model. "What you’re doing is not good," says Gottfried. His son Paul Böhm looks up, sits down beside him, folds his arms too and replies: "but it’s how I want it." Concrete Love is a calm, observational documentary about the Böhms, a German family of architects where work, private life and family are inextricably woven together. Gottfried is the son, grandson, husband and father of architects.

"A connection between my relatives in Cologne and the Böhm family meant that I already had a long-standing friendship with them before the film was even conceived," recalls Staerkle-Drux. "In Gottfried Böhm I saw a formidable artist full of youthful curiosity – a contemporary in spirit, if you like, despite the (70-year) age difference between us."

"Gottfried still works every day on construction projects with his sons—Stephan, Peter and Paul—who are also architects, operating their own offices from within the same family home." From the very beginning of the process, Staerkle-Drux became deeply interested in the ways in which the Böhm family (almost) seamlessly meld their personal lives with that of their work.

For over two years Staerkle-Drux shot the film at the Böhms' residence, designed by Domenikus Böhm, in Cologne. "I wanted to explore the personal stories that lie behind the façades of their buildings, and to show that these mighty constructions also express considerable emotion." Concrete Love "documents the moment at which the family loses its emotional heart: Elisabeth who, as well as an architect, was also a wife and a mother – and their most important source of inspiration." He didn't expect that, following her passing aged 94, Gottfried would embark on a journey back to the significant buildings which marked milestones in his life. And he was there to capture it all in film.

ArchDaily readers have the opportunity to win one of three pre-release DVD copies of the film, courtesy of the team behind Concrete Love. The giveaway ran between April 28 and May 5, 2016. Winners have been contacted.

You can find out more about the film, here. You can pre-order a copy, here.