At a press conference on Thursday, FC Barcelona presented the design of the new Camp Nou, a project led by Nikken Sekkei (Japan) with Joan Pascual i Ramon Ausió Arquitectes (Barcelona), who won the international competition in early March.

Alongside the team's players, the board of directors chaired by Josep Maria Bartomeu presented the model of the project, which will begin construction in mid-2017 to expand the stadium's capacity to 105,000 spectators. In addition, the organization published a series of videos about the project, including an explanation of how the expansion will take place without affecting a single football match.

"We will build a great open space around the stadium, like a giant piece of origami arranged not to disturb the flow of people into the stadium," explained Takeyuki Katsuya, the lead architect at Nikken Sekkei. "The solution for the stadium was to continue the path started by Mitjans," the original designer of the stadium, Francesc Mitjans-Miró, added Joan Pascual. "In this sense, we said: the climate of Barcelona allows it. We open it and we leave all of this open space. This is what makes it unique, different."

The new Camp Nou is part of Espai Barça, an ambitious remodeling project involving all the facilities of the Catalan team, including the new Palau Blaugrana designed by HOK and TAC Arquitectes, the Barcelona Campus and new Mini Estadi - all without interrupting matches in future seasons. 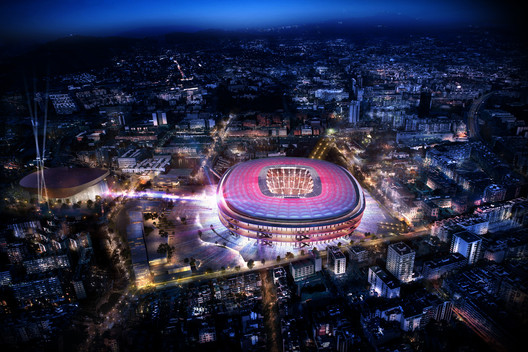