Save
Rooms with a View / Rue Royale Architectes 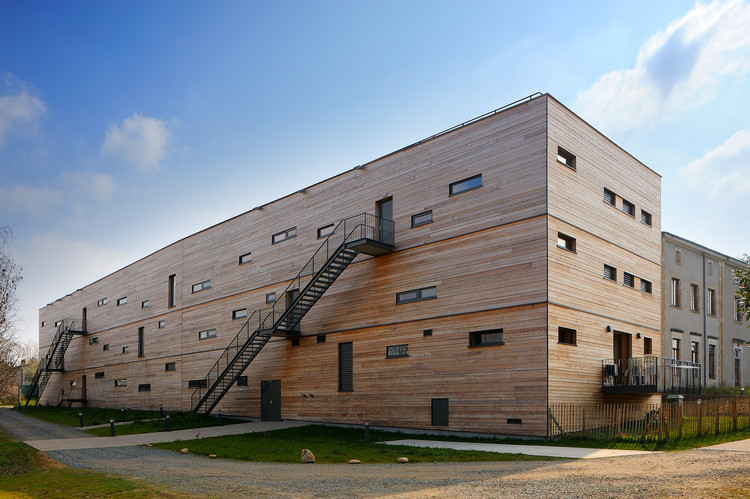 "Rooms with a view", evokes not only the film of the same name, but also the magic of a domestic, landscaped setting. It is in this poetic, yet functional, spirit that the architects imagined their project for the LEGTA (Agricultural Technological and General High School) boarding house in Saint-Genis Laval.

The need to comply with very stringent energy standards (BEPAS) increased the complexity of the project’s starting point which was to provide an appropriate architectural solution for an imposing programme, which would fit into an agricultural landscape and organize the relationship with the existing buildings.

The project has had to fit into a very heterogeneous setting with the different structures built over time to meet the growing needs. On the Coin agricultural estate which covers 75,000 m2, the old farm with its characteristic manor house features was extended in the 1970s with a second set of buildings built in the style of time to house the teaching facilities and dining room. Twenty years later the agro-food research laboratories, resembling industrial premises, were built on the outer boundaries of the plot.

In terms of the landscaping, the hilly topography offers a number of viewpoints looking out across the surrounding countryside, taking in the Monts du Lyonnais, the Pilat, and the Rhône valley. The rural nature of the setting is still pre-dominant, with orchards and remarkable woodland spaces, but the surrounding urban housing estates are gradually getting nearer.

In this context, the boarding house can be viewed as the last piece of an architectural puzzle. It both brings together the different components and reveals their true nature. It is the final full stop, organizing the space and landscape, guiding the resident and the user.

In order to meet the dual challenge posed by a dense programme covering 2,000 m2 in a rural setting which needs to interact with the original building, the designers decided to divide the project into three structures and to simultaneously reorganize the outside spaces.

Two new buildings, facing east to west, act as the backdrop. Converging slightly, they form an angle with the manor house around a levelled off contemplation garden. The boarding house on the second floor dominates the architectural grouping. It accommodates the bedrooms and support services and extends to the west with the staff housing and technical rooms. The common room on the ground floor benefits from the advantages of all four aspects and frames the square formed by the high school. The main entrance, reception area and common room are all located in this part of the programme. At a right angle a second volume outlines a clear, simple outcrop which organizes the vertical accesses, the study rooms, and the service rooms. An old hangar with golden stone pillars has been renovated to form a covered courtyard. Sheltered, but still open, it closes off and confirms the status of the central square around which the rest of the programme is built.

The overall layout uses a rift effect to treat the interface between the old and new buildings which takes the form of an old pedestrian alleyway which is used to access the service spaces for the project: student parking and staff housing.

The walkways and staircases are absolutely crucial to the project. They benefit from lots of natural light and differentiated views. The bay windows in the boarding house are north-facing and positioned at different heights which allows for natural smoke control and offers views over the orchards.

Rooms with a view.

Splitting the project over three buildings gave the project a certain functionality and improved efficiency. This is notably true for the bedrooms, the mainstay of the boarding house, which are housed in a separate building accommodating one hundred high school students.

Each 30 m2 unit is designed for three people and contains three beds, separate wardrobes, individual aligned desks and a bathroom with a shower and two wash basins.

This unity aims to create a feeling of domestic harmony which allows each person their own privacy in a pleasant shared space. Every last detail has been thought out to optimize the use of space and enhance the user-friendliness of the communal areas. The essential features have been carefully preserved and the architects have worked hard to include details which create a sense of family living, including components that can be customized by each individual, such as the curtains and bookshelves. These bedrooms are protected, welcoming spaces in which community and individuality coexist. 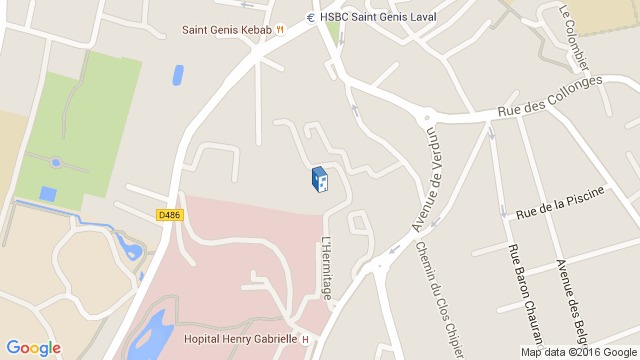 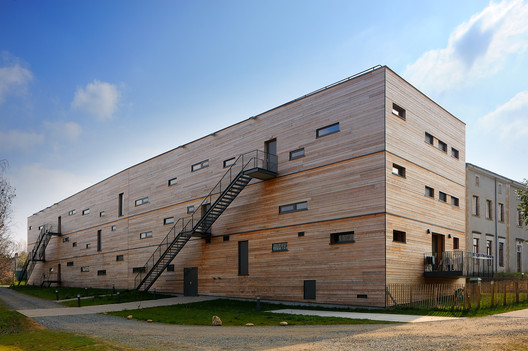