OMA’s Pierre Lassonde Pavilion of the Musée National des Beaux-Arts du Québec (MNBAQ) will open to the public on June 24, 2016. Increasing the museum’s space by 90 percent, the 14,900 square-meter pavilion faces Québec City’s Grande Alléee and seeks to fuse the energy of street life with the idyllic landscapes of the adjacent Parc des Champs-de-Bataille. 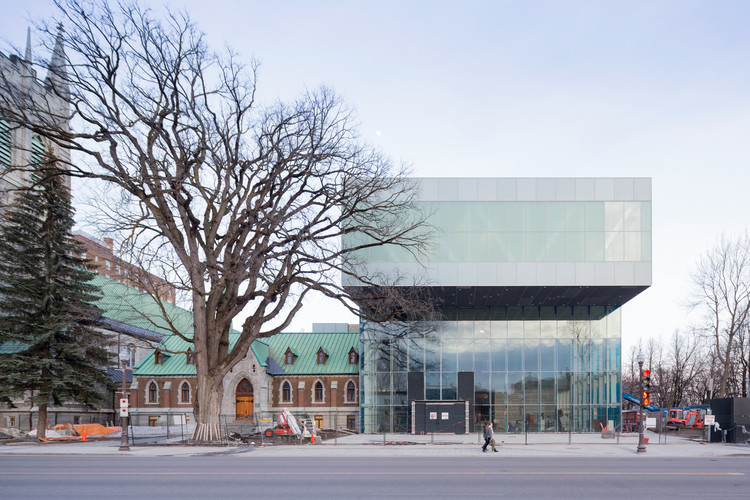 Discussing the project, MNBAQ’s Executive Director and Chief Curator, Line Ouellet proclaime, “The world heritage site of Québec City now has a new landmark. Lucid and ingenious, the Pierre Lassonde Pavilion simultaneously stands out on its site and weaves itself into its surroundings, bringing out the potential of the urban situation with a logic that is as impeccable as it is unexpected.”

The new structure, a lopsided ziggurat, has three rectangular volumes that shrink as the building ascends and shift from center into more pronounced cantilevers. The building connects to the 83-year-old institution’s three existing pavilions (from 1867, 1933, and 1991) through a 130 meter underground passageway. The facilities of Pierre Lassonde Pavilion include: column-free galleries for permanent and temporary exhibitions, an auditorium, cafe, museum shop, and roof terraces for outdoor displays. The project was realized as a collaboration between OMA and Montréal’s Provencher_Roy architectes.

“Our design stacked three gallery volumes in a cascade that continues the topography of the park.” says lead designer Shohei Shigematsu. “The activity of the city extends below, providing a new point of interface between the city and the park. Art becomes a catalyst that allows the visitor to experience all three core assets – park, city, and museum – at the same time.”