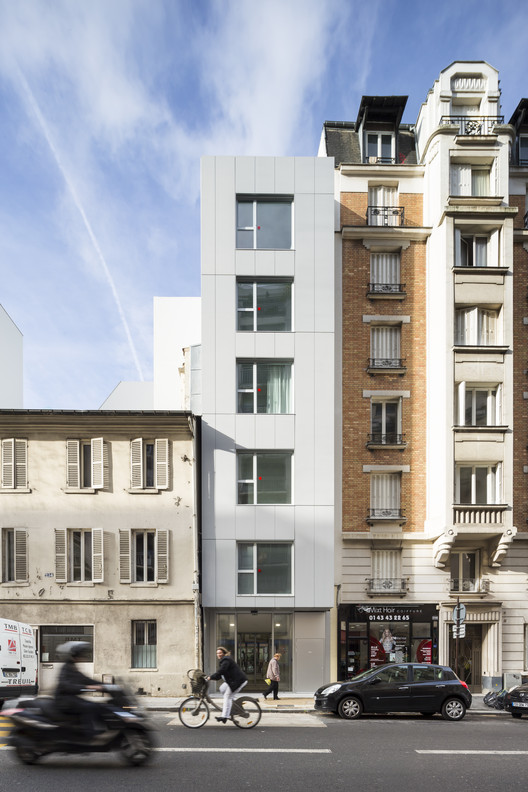 Text description provided by the architects. This project provides sheltered housing for frail, elderly residents with a variety of disabilities. The building comprises individual studio apartments, communal areas and medical consultation rooms for residents and out-patients.

To understand the project one must understand the history of the site at 232 Rue de Charenton in south-eastern Paris, along the side of which runs a passage that can be found on city plans as far back as 1789, at which time it led to cultivated fields. Fraught with real-estate related tension due to the complex planning laws in Paris and the Bercy neighbourhood, the project took seven years to see the light of day. The site is surrounded by high buildings that cast their shadows, and cramped by a house on the corner whose owner refuses to sell. Nonetheless, the orientation is interesting and planning laws are moving in the right direction. To the north, on the Rue de Charenton, we were able to build to six storeys, to the south, at the heart of the block, up to three storeys.

As with all historical urban environments, planning regulations left no flexibility in terms of defining the height, width and length of the building. The resulting volume faithfully transcribes the layers of restrictions: the minimal access from the Rue de Charenton, extending back into the block where it is calm and protected, gives a position between street and garden with, above all, a large part of it in full sun at the height of summer.

Shaped like a bayonet, the site engaged us in an interesting architectural exercise. The urban restrictions combined with the requirements of the brief led us to consider the most efficient means of squeezing in the allocated 2,150 sq m. Following the planning laws, the resulting volume slips like a living thing in between the existing buildings – our pragmatic approach aimed to use every inch of available space.

On the Rue de Charenton, the generous height allowances and the shape of the site led us to design volumes of surprising proportions, which fold along the roofline. On the Ruelle de la Planchette, the upper part of the aligning facade folds in, scrupulously following the volumes permitted.

The smooth external skin faces onto the city. Generously proportioned windows, almost square, provide maximum light and transparency in all the internal spaces, a luxury in Paris. The day-rooms are arranged around two patios; their proportions were reconsidered in order to meet standards, as well as requirements for natural lighting. All the day-rooms are naturally lit, as are the circulation spaces.

The height of the neighbouring buildings gives them plunging views over the site. With this in mind, every detail of the building was carefully studied to ensure that they fitted in and were pleasant to look at. In both the design and its realisation, we opted for a building that is sober and adaptable, conceived in terms of real-life usage over the long term. We took into account the possibility of future extension in the event of acquiring the corner house. In considering the ensemble of issues with regards to health and thermal and acoustic comfort, we gave great importance to user needs.

The first consideration regarded contact with the outside world. The quality of the envelope and exterior openings is essential in ensuring the quality of a building. Large windows create a relationship between the internal spaces and the city and neighbourhood. The second consideration concerned opportunities for interaction within the building. We strove for transparency at the heart of the site, for the quality of the communal and circulation spaces, which are designed as largely glazed walkways providing opportunities for residents to see, meet and interact with one another. These circulation spaces are a determining factor in the quality of life in shared accommodation. The third consideration took into account the layout of the different functions. The building houses several different functions, as well as the private living units – communal areas, easily accessible spaces for activity and leisure, and work areas for the staff.

Finally, if the question of energy is fundamental, so, obviously, are questions of well-being, comfort and health.

The relationship between the occupants and the city was one of our foremost concerns. On the ground floor on Rue de Charenton is the entrance hall, on the Ruelle de la Planchette is a service entrance, and between these two entrances, along the Ruelle de la Planchette, administrative offices, family reception areas, and part of the paramedical unit are located. Designing the circulation in bayonet formation enabled us to place large spaces at the heart of the block and small offices along the side street. At the centre, directly visible from the entrance hall, is the multi-use room and the two large activity and reading rooms.

Large, central glazed areas, including the main patio, which is itself an ‘outdoor room’, help to maintain transparency throughout the ground floor. At the semi-basement level are the service areas, for maintenance, laundry and staff, lit by daylight. In the central zone, three large activity rooms are organised around the central patio, from which they receive natural daylight. We identified the areas where residents would spend the most time, such as the activity rooms and circulation spaces, in order to prioritise natural light. Areas that are used only occasionally, such as physio and psychomotor therapy rooms, are daylit from the sub-basement level.

Repeating the same configuration of circulation space for each floor of the building, we created an efficient means of arranging the various areas. We distributed the 26 housing units on the upper floors, feeling that ground-floor bedrooms would not be agreeable. The patios are places for contemplation, like Japanese patios. They are the points towards which views from the communal living areas are directed. Circulation ceases to be a ‘corridor’, instead becoming a ‘route’. One passes from one point in the building to another looking outside.

The architecture seeks a duality in the choice and use of materials. On the city side, a neutral skin, discrete and timeless, is achieved using an external facing in high-resistance concrete, grey in colour, dressing the edifice for urban life. On the patio side, larch-wood cladding, which requires no maintenance, provides a welcoming appearance for the residents. 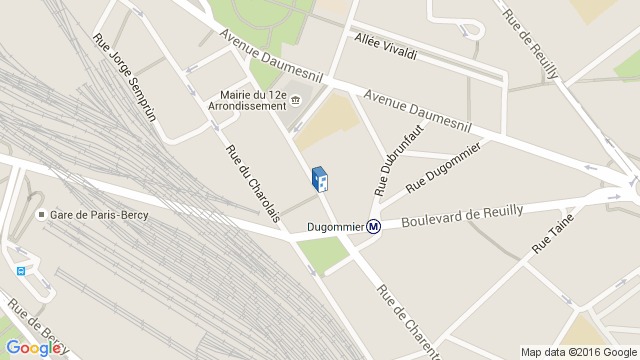