OMA has revealed the design for its first skyscraper in Tokyo. A tower with a torqued front-facade, the building incorporates an elevated park and access to a new Hibiya Line subway station in a project that mixes hotel, office, and retail components.

Designed by Shohei Shigematsu, Partner and Director of OMA New York, the tower is one of three proposed by Japanese-developer Mori Building. OMA's Toranomon Hills Station Tower would join Toranomon Hills Business Tower and Toranomon Hills Residential Tower, and will, according to the firm, "transform the area into a more vibrant, globally accessible business hub that will entice individuals and enterprises from around the world to live, work and play, reshaping Toranomon into a gateway to Tokyo and hub for international business." The tower is scheduled to be completed in 2022, but partial subway service will begin in time for the 2020 Olympics.

“Toranomon Hills Station Tower serves as a key node that connects the new station to the other towers and the surrounding district,” says Shohei Shigematsu. “The axis of activity is designed to run through the base, extending vertically to wrap the tower; communicating the activity of the complex at an urban scale.” 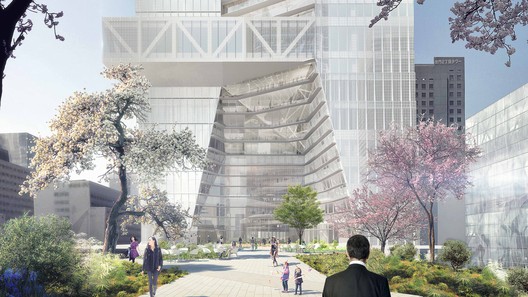