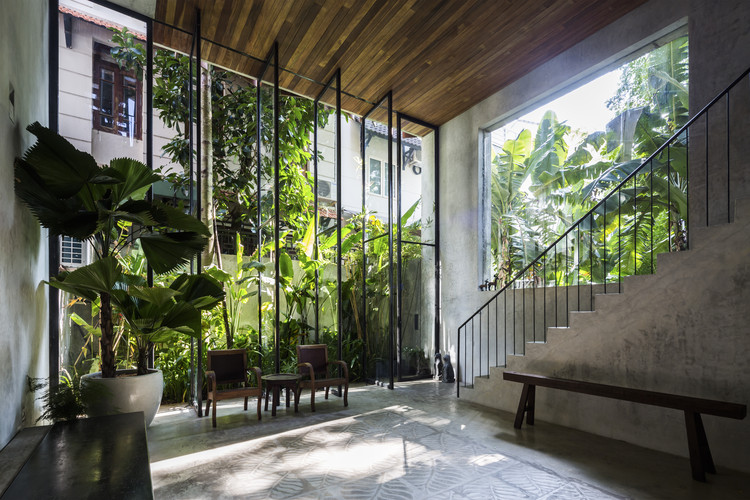 Text description provided by the architects. The perceived quality of life in buildings should come from the geometry and how that geometry connects to human beings”. It was the initial thought we had when being offered to design a row house in Phu My Hung, a new urban development area in the Southern Saigon. This project could be considered as another attempt to find a contemporary living manner in row house typology. The brief was to get rid of the way of living we used to have in common town house, where the staircase in the center along with the corridor to access spaces covered by four walls which isolate people inside his own world. The client is a nuclear family, consisted of the parents and two kids with the explicit wish to have a home fulfilled with natural elements while being able to improve the spiritual connection between each family member.

Therefore, in a general view, the house looks like a composition of cubes as the private rooms while the spaces created under the shifting volumes will become the public areas for the family. The bold section plan which collateralized circulation, privacy, and activities-control, could be used to decide the function in each voids and volumes. Continuously, a circulation as a silk ribbon is consequently created to connect all spaces together and tighten the relationship of spaces. From the main entrance, a narrow covered passageway introduces people to a 5-meter-height living space with the rotating door system at the end of the house. This system would be opened to the backyard garden and instantly fulfilled by wind provided through the tunnel. The living space and the dining area both expands vertically, through a double height, which helps to harmonize the public spaces inside the house with the outdoor impression. Along the straight flight steel staircase, some floating private volumes such as library, space for the guest, and children space could gradually be seen. The master bedroom with the private common space in the fourth floor, are connected by a stone pavement that overcomes the garden which has been landscaped with indigenous plant and the top light above. The other utilities are arranged to be in the top floor. The rooftop garden provides outdoor space for the family to enjoy the night life in this new urban area. From the beginning till the end, the staircase – as the spine of the house lets us involve in a non-stop adventure to discover different places throughout the house.

The architecture takes advantage of two fronts, east and south. On one side which is also the main elevation, is to the sun, the other has a magnificent view to the public park of the ward. Into a consistent dialogue with the next-door landscape, large openings in the southern side are proposed to enjoy the spectacular scenery of enormous plantings from the parks, and witness the seasonally qualitative change throughout the years. The main elevation, also indicates clearly the concept of geometry, while the volumes are mostly covered by wooden louver to absorb an amount of the sun heat before coming inside the house, the rotating door system covering the second floor void, becomes the gate between the outside and inside of the house. When all the doors are opened, the nature could be invited to flow inside and later on, the outdoor feeling would be provided for the whole building. By that meaning, the natural elements are always welcomed to be one part of the house as the client’s request.

We also have the practice that speculated on the idea to imitate the leaf-pattern and operate it as a decorative but still functional element. The outdoor wooden panels, which are externally arranged in checkerboard pattern to express the main concept of stacking and shifting volumes, become fruitful with the leaf-pattern carved in and through, one by one. On the other hand, the internal louvers can be rotated so as to adjust upon the sunlight. The exposed concrete floor become more interesting with the “carpet” made with the leaf-pattern terrazzo. Moreover, the furniture itself is another way to increase the variety of pattern in interior design. The brutal feeling, with this meticulous detail could somehow strongly strike the eye in aesthetic sense.

This architecture offers an interpretation of a fresh new lifestyle for young families in the modern tropical city. In another way, it could be considered as the cross point of modern and natural life which can be perfectly compatible with each other. 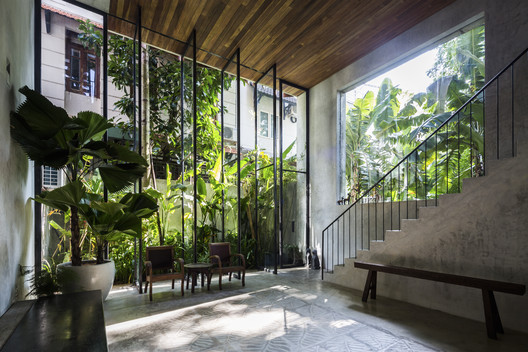