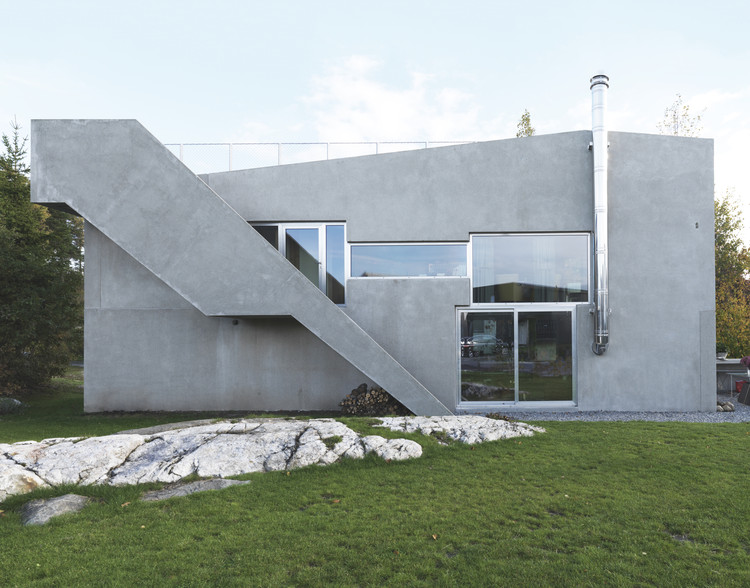 Text description provided by the architects. The client wanted an affordable little house, with room for one family and lettable studio. Lie Øyen solved the task with a puzzle of prefabricated concrete elements.

Villa Tussefaret is a 60 m2 compact single family two storey house. It can be divided vertically into one main unit and one rental unit. Combined, these two units provide four bedrooms, two bathrooms and two living rooms. The idea was to create a concrete “shell”, a one-room house that could later be divided into two floors, which had to have room for two children and a rental unit. Through the design process the house became slightly more conventional, but the idea of the “big shell” is maintained. The house is made from prefabricated concrete elements. The insulated sandwich panels were deliveres ready to use, with exterior  and interior finish. This made it possible to complete the structure quickly. The elements are intended as single pieces that are assembled and rest on each other. Their size is close to the maximum for transportation and assembly. Each element has a unique shape, and they are combined so that the spaces between them make up the window openings.

The windows and doors are made of crude aluminum, the only other material used in the exterior. All material can be left untreated. The interiors are oak veneered birch plywood. Room zones connect the two floors, and the custom-built furniture, made by the architect’s own carpenters, emphasizes these zones. The furniture can change as the family and its members develop and grow.