Rotterdam—the original "tabula rasa" city—will soon become host to a giant staircase, ascending 180 steps from Stationsplein (outside Rotterdam Central Station’s iconic entrance) to the top of the world-renowned Groot Handelsgebouw building. According to MVRDV, the structure will "follow in the city's tradition of celebrating reconstruction milestones" and, as such, the scaffolding system used to construct the staircase will be "a nod" to the 75th anniversary of the rebuilding of the city following World War II.

The giant infrastructural folly has been designed to respond to the angles of the existing station, "connecting the contemporary icon with a historic monument" whilst—through its construction—referencing the seemingly perpetual urban reconstruction that the city has, and continues to, experience.

At the top of the staircase—which will sit at 29 metres tall and 57 metres long—those who have completed the ascent will find a temporary observation deck, providing expansive views across one of Europe's largest port cities. The roof, currently occupied by a bar, will also see the temporary reopening of a former cinema (last active in the 1960s) which will screen a wide variety of films, debates and performances during the life of the installation. Winy Maas, co-founder of MVRDV, has indicated that "it would be good to make it a permanent fixture."

The Stairs will be officially opened on the 16th May 2016 by Rotterdam's Mayor and will remain open until the 12th June. Admission is free and the installation will be open from between 10:00 and 22:00.

MVRDV also have proposed another controversial (and more permanent) project for Rotterdam. Find out more, here:

MVRDV's Reflective 'Wunderkammer' in Rotterdam is Given the Green Light 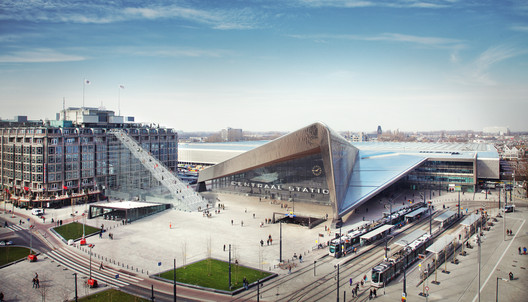