Three finalists have been selected for the Tel Aviv University Nanoscience and Nanotechnology Center Design Competition.

The competition called for designs to meet scientific needs and establish an identity befitting the local context of the city of Tel Aviv and the University campus. Thus, the three finalists created a balance between technical requirements and soft program elements like office and public space, presenting proposals for a center that acts "as an effective facilitator in the dialogue between modern science, Tel Aviv University, and the general public," according to a press release.

“The new laboratory building will be a working place for over 120 scientists and engineers who will collaborate with one of the most significant universities in Israel. According to the technical report there will be 12 research labs on three floors: physical, biophysical, neural engineering, molecular electronics, and other labs, as well as office and public areas.”

The three finalists are:

The Atelier d'Architecture Michel Remon's concept is a matrix of vertical lines creating a 'skin' covering the building. It plays an important role in the exterior load bearing frame. The construction will help control natural light and balance out the interior-exterior ratio. Visually, the building will not have windows or doors. A undulating facade will cover the building. Among the energy efficiency solutions suggested by the company are: special glass to optimize sun energy, natural ventilation, solar panels to cool the building and a rainwater collection system. 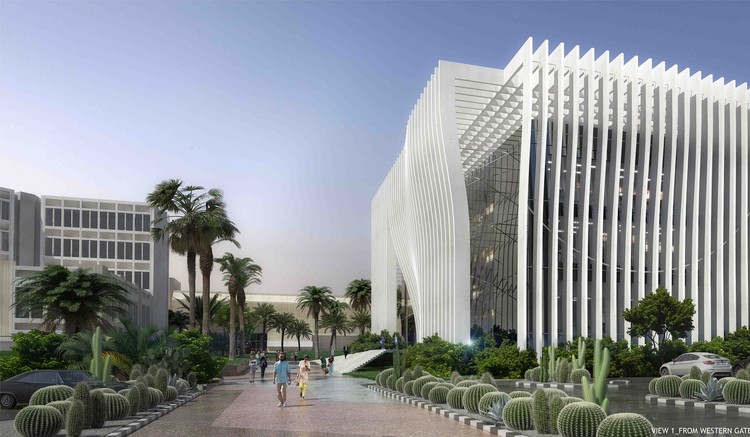 The project, proposed by Jestico+Whiles Associates is a rectangular block carved out of stone. Its shape is formed according to the context, climate and internal functions of the building. Sharp curved indentations form the entrance and a chimney marking the eastern entrance. The shape of the facade was inspired by the Holliday Junction parallelogram that is often used in DNA nanotechnology. The facade will be made of white glass fiber reinforced concrete rainscreen panels with a stippled surface finish. The authors suggest cutting electricity consumption costs by controlling the speed of the mobile equipment.

Zarhy+Pez's design's main feature is glass facades. The glass constructions are suggested to be protected by a second white 'skin', a multifunctional grid made of vertical and horizontal components interweaving with the main structure of the building. According to the authors' concept the glass surfaces maximize the use of natural light and improve the temperature balance inside the building. In order to have comfortable working conditions in the building it will be equipped with a system of passive heating in winter and sunlight protection in summer.