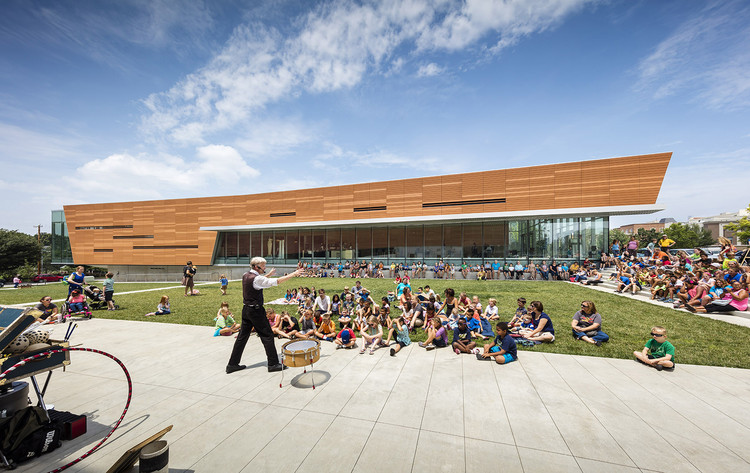 Text description provided by the architects. The expansion of a 1970s Brutalist-style library in downtown Lawrence, Kansas has transformed it architecturally, reinventing it as a 21st century civic place. The existing library, designed by Lawrence architecture firm Robertson, Peters Ericson, Williams P.A. and constructed in 1972, was uninviting due to poor thermal performance, difficult wayfinding and a lack of daylighting and openness. Library attendance was down, particularly with younger generations. Through extensive community dialogue, the citizens of Lawrence voiced their thoughts and established key design considerations for the project, including an enhanced children’s area, greater access to technology and an emphasis on environmental sustainability. The citizens recognized the significance of the library’s location in the community and the opportunity it provided to establish a new “place” within the downtown area. Gould Evans responded with a design that addresses the changing role of the library: from book repository to multimedia community hub.

The design for the addition is based on a simple expansion diagram. A continuous reading room wraps the existing library on all sides, transforming it into a forward-looking, community-centered place. Each new elevation opens up to a different public constituency:  neighborhoods to the west, the post office to the north, downtown to the east and a new plaza to the south. The new terra cotta façade is solid in areas where book collections need to be protected, employing long, narrow horizontal apertures to bring daylight into reading areas. Each corner is designed with floor-to-ceiling curtain walls that reveal glimpses of unique public amenities, including children’s cubby areas, teen gaming zones, small meeting spaces, and a coffee bar in the main lobby.

Three primary building materials were selected to work in concert with each other and convey the concept of a continuous experience for patrons. A high performance terra cotta rain screen is the primary exterior material. This was selected as a gesture to the historic red brick of downtown Lawrence while demonstrating a very modern application: its high-performance assembly helps control thermal transfer from exterior to interior. Clear-coated tongue-and groove ash paneling installed over the previous exterior walls of the original library form a continuous interior surface, providing warmth in contrast to the original painted concrete walls. An abundant use of glass opens the library up at each of its corners and via new skylights and clerestories, brings light into the core of the original library.

To aid in the goal of achieving a warm, open, light-filled and welcoming place, a new atrium was cut out of the center of the original library, connecting the basement level to all the way up to the new clerestory windows at roof level. A glass sculpture created by a local artist fills the atrium with a wide spectrum of color. In addition to stacks for books and periodicals, the addition and renovation provides dedicated areas for different age groups and places emphasis on community gathering places over silent spaces. New youth areas are organized around two main zones: a younger children’s zone and a teen zone, each with appropriately scaled technologies. The younger children’s zone has independent study areas, play areas and computer zones. The teen zone is similarly organized between print and electronic media. The electronic media spaces are visible to the streetscape along a main pedestrian artery, conveying the library’s identity as a 21st century facility.

Meeting and maker spaces are distributed throughout the library, adjacent to and in support of the other library spaces. One key space that has become particularly popular is the Sound + Vision Room: a community access recording studio complete with a drum set and instruments. Lawrence has an active music culture and the Sound + Vision Room is used by local musicians to make recordings, such as demo tapes. Within a few months of the library’s reopening, user visits increased 55% over the previous year, with youth program attendance up 160%.

A new plaza park adjacent to the library entry was part of the project. This park accommodates both library and community functions with an informal stepped amphitheater, an events plaza and support for an ice-skating rink over the holiday season. In addition to the planned events, the park provides informal space as an outdoor reading area and as a connector to the community swimming pool and the larger downtown area.

The sustainable design strategy for the addition focused on increasing energy efficiency via daylight harvesting throughout the interior, improving thermal performance via the terra cotta rain screen system, and strategic sun-shading to eliminate glare. While not tied directly to energy savings, the existing building and mechanical systems were re-used rather than completely replaced which reduced some of the embedded energy involved in building a new structure. The net result of these strategies was the library was able to increase its size by 50% while actually reducing the building’s energy consumption.

The building is in the LEED certification process. The building has recently been recognized with a Landmark Libraries Award by Library Journal, as well as the Honor Award for Excellence in Architecture by the AIA Kansas. 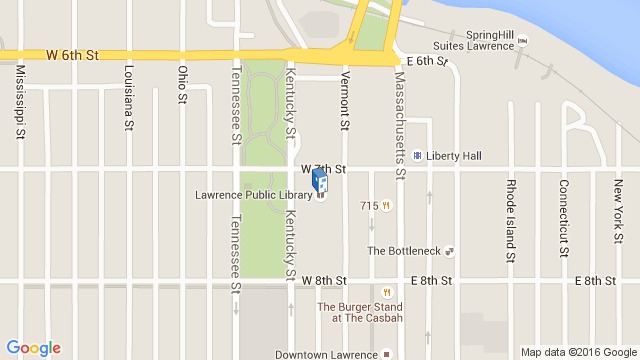 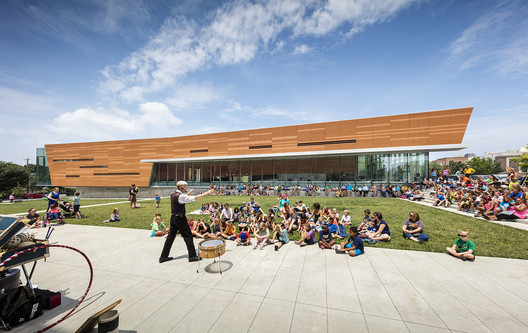