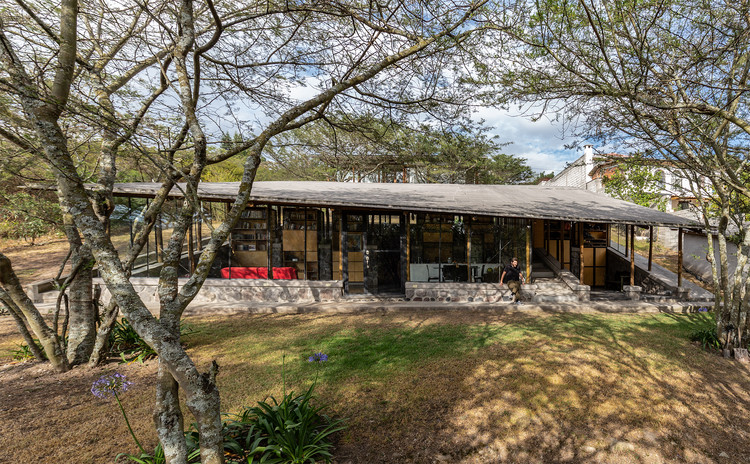 Culunco is the name given to the paths situated in the middle of a dense vegetation, generally paths that were created for ancient villages of Latin America, like those of the Incas. This is as well the name that the architects from Al Borde chose for an excavated house in the middle of a sloping ground, surrounded by earth and trees in the Valley of Tumbaco, in Quito. The original project was composed of two houses, one of which was finally built, constructed with local materials.

The starting point was an intense contact with the nature, although it was modified by the harmonious presence of the house. The orthogonal volume is composed of two programs divided by the stairs of the entrance but united by a same excavation, same construction system and same roof. On one side, buried, are organised two bedrooms that are opened on the living room and the kitchen; on the other side, a music studio and a workshop. The privacy necessary for the bathrooms and bedrooms is created by the implantation: the site itself protects the private uses, while the glass facade is used around the social area.

The architectonic approximation is given by the climate, the costs and the simplified construction system. Tumbaco is situated 40 minutes from Quito and at 2600 meters above sea level. Its climate is warm and doesn’t need air conditioning, heating or any complex isolation systems. However it uses the sun as a source of heating. This context is why the architects chose glass for the whole perimeter of the house, the openings ensuring the ventilation. The thermal inertia produced by the buried part of the house allows an adequate thermal comfort.

The structure resulted from a modular system of eucalyptus trunks of a same size and diameter, seated on a stone wall with varied inclinations. This forest of sticks supports the paraboloide deck made of plywood sheets painted in white, that are inclinated towards a same vanishing point. The whole floor is made of smooth concrete.

The structural modulation and the selection of materials easily accessible and simple allowed the property to become the construction of the project. In Ecuador, eucalyptus trunks are one of the cheapest materials of construction, usually used for formworks or temporary housing. Walls made of stonework are less expensive and easier to produce than walls of concrete. The constructive simplicity didn’t prevent the architects of creating strategic spatial relationships that guarantee beauty and comfort in the Culunco House. 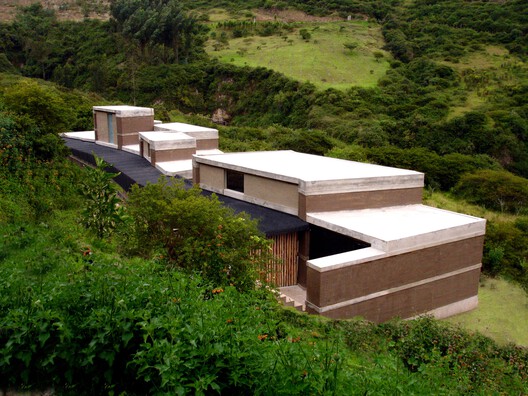