The dome-like, glass structures of the original plan, however, have been replaced with a “photovoltaic integrated canopy skin” that drapes over the buildings like a tent. The canopy skin will allow for the generation of renewable energy on the site, and regulates "indoor climate, air quality and sound."

Focusing on creating a sustainable campus, the proposal features a heavily landscaped master plan, as well as a focus on walkable, bike-friendly circulation throughout the campus.

As a whole, the reduced scale of the plan demonstrates a friendlier, more intimate scale than the previous proposal – perhaps in response to earlier concerns from Mountain View regarding business diversity and appropriateness to site.

The full plans can be viewed on the Mountain View city website.

BIG and Heatherwick's Google HQ to be Built with Robots 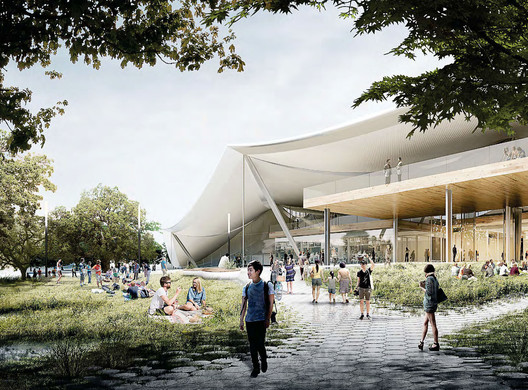