Save
Territory Without Ground: Designing in the Sahara Desert
Share
Or
Copy

From the architects. The sea of sand turns the desert into a territory without a ground. Constantly shifting, the ground is never a point of reference; like sailors, the inhabitants of the desert rely on the constellations as the only stable geographic guides. This project proposes a city above and below the ground: a suspended city and a buried city. Beyond its allegorical and critical dimensions, the idea that a city be experienced in its verticality rather than its horizontality is strange and powerful. The interiority that is created between the city during the day (below the ground) and the city at night (under the sky) becomes the heart of the public space. It is an inhabited land that allows the landscape to pass through it.

Human settlement has always derived from the tension and balance between the geography of the vast territory and a geometry that confronts, measures, and contains it. The project is composed of a series of rings that grow smaller as they approach the upper city or descend towards the lower city. The articulation between these layers, which turn like a helix, produces the urban voids that grow increasingly thinner from bottom to top and from top to bottom. In this way, a vertical gradation of public, communal, private, and intimate spaces control the level of sunlight and ventilation in this urban void.

As a Masonic figure, Dantesque allegory, and 'carceral' fantasy, this urban structure encloses as much as it is enclosed. The city becomes a pioneering adventure in a new world; in a groundless territory without end, the city attempts to anchor a human presence, to give it a comprehensible scale. The city is in the world; it becomes the world. 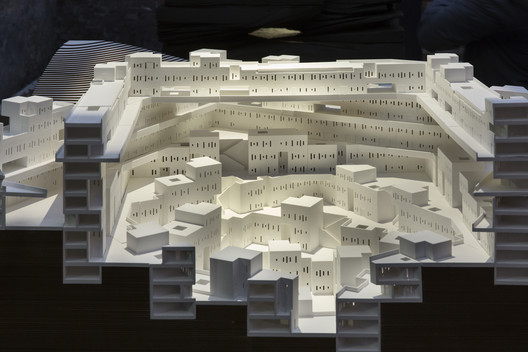