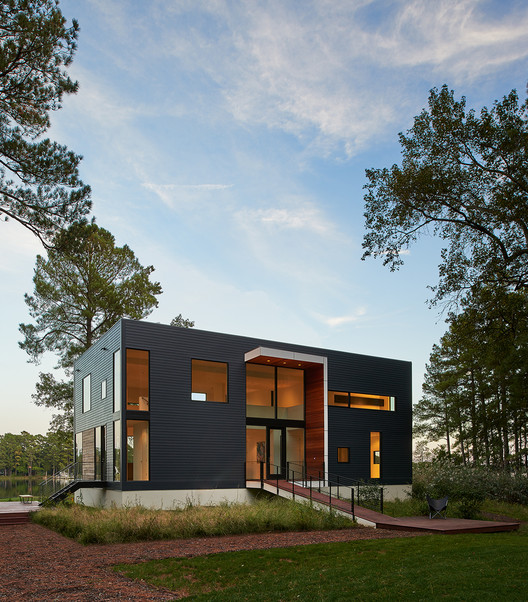 Text description provided by the architects. The design of this house in St. Michaels, Maryland was greatly influenced by environmental regulations, zoning requirements and restrictive building codes specific to this site. The existing Dutch Colonial Style house, built in 1989, was located within a One-Hundred Foot Buffer Zone on Solitude Creek, a small estuary in this Maryland Eastern Shore town. A recently adopted Floodplain Management Ordinance mandated that no new structures be built within the Buffer Zone, and that all renovated or altered existing structures be updated to meet new zoning, building and environmental code requirements.

The existing house largely failed to take advantage of water views, the layout was not optimal, and as constructed, did not work programmatically for the new owners of this property. The existing structure was in poor condition, with rotted framing members and mold and mildew infiltration from previous floods. The house did not meet many of the new code requirements; most notably the requirement that any habitable structure be located above the newly designated base flood elevation. To maintain the proximity to the water, and to avoid building a new house outside the Buffer Zone (which would be a much greater distance from the shoreline), it was decided to remove the existing structure to the foundation, increase the height of the foundation two feet, and build a new structure above this that would meet all of the new codes, ordinances and regulations. Per these regulations, the footprint was not expanded or altered. While the new house is built above the existing foundation, a new covered entry porch is cantilevered beyond the foundation, permitted as long as the cantilevered section was not larger than the pre-existing stoop. A series of small decks and ramps extend to the landscape and are constructed to break apart in the event of a major storm or flooding.

The goals of the project were to take advantage of water views and provide light filled spaces, while accommodating the owners’ collection of modern art, which includes works by one owner, who is an artist specializing in abstract paintings. In response to a relatively tight budget, the buildings’ Massing and Materials are simple and straight forward. A combination of windows varying in size, shape and location animate the spaces, while providing controlled views of the water, pine forest and adjacent marshes.