Read more
Save
Block'hood: The Neighborhood Building Game That Will Test Your Urban and Architectural Prowess
Share
Or
Copy

It is said that the best design solutions are often found when a project comes with a very strict set of parameters. So it makes sense that architectural games, with their coded restrictions and rigid rulesets, tend to draw out a particular kind of creative problem solving. Recently, games like SimCity and Cities: Skylines have inspired designers to experiment with constructing virtual cities without the fear of causing real-life consequences. In turn, these creations have inspired new perspectives on real-world designs.

The newest entrant to the world of architectural gaming is Block’hood, a neighborhood-building simulator that challenges the user to create a functioning community out of 1x1x1 blocks of various program. The interface features bold, stirring graphics from an axonometric view and effects that cycle between day and night. Block’hood taps into the simple desire to play with blocks, and then ups the ante by making the blocks’ existence vulnerable to the environmental conditions you create. 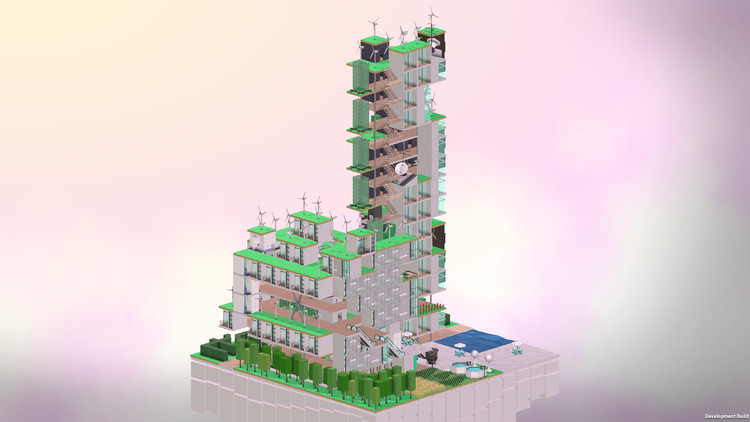 Starting is as easy as picking a block and clicking on an open square on your blank site. Each block requires and produces different resources, the management of which is essential to maintaining and growing your neighborhood. For example, trees require water and produce fresh air; windmills require money and produce electricity; apartments require water and electricity and produce labor, youth and community. As soon as you have a block placed, you begin to receive data feedback: what resources are your blocks using and producing? Are all of your units accessible? Is your tower structurally sound? If units aren’t receiving the input resources they require, they begin to decay, and if left unresolved, will break down entirely. Soon, the ground plane will be filled, and growth will need to continue vertically. Most blocks can be stacked, and access can be linked using staircases, elevators and structured corridors.

In the vein of classic city building games like SimCity, success in Block’hood requires resource management and a balance between varying building types. Building efficiency is impacted by proximity to other block types, and an efficient design is rewarded with increased resource output. But where SimCity tries to reproduce the visual scale of a real-life city, Block’hood aligns all buildings to the same size, a single 1x1x1 block. In this manner, building types look strange standing alone, and beg to be stacked, the way children stack blocks to create utopian dream cities.

Yet Block’hood does not readily allow for a utopian solution. There is no “beating” the game or perfect structure. This opens up the player to use their creativity to create elegant solutions to community needs—though it's a process that takes practice. My initial attempts at creating a ‘hood segregated human occupied spaces into designed areas and left resource-producing blocks scattered around the perimeter of the buildable surface; a logical solution, but not an attractive one. But it is issues like this that feel the most useful to our improving our real-life design intuition—as future cities become more dense, structures will need to house a wider variety of functions, rather than relegate them to the outskirts of town.

One challenge of the equal-sized block system is that each human block requires access, yet corridors take up as much room as the spaces they lead to. This led me to try to discover new ways of connecting spaces that could serve their own function—rather than connect apartments linearly, I began connecting them to shared park spaces, sometimes containing civic spaces such as a market or a school. The constraints and the scale force you to place single structures with a more urban perspective.

Screencaps by the game producers show designs ranging from Metabolist-inspired capsule towers to small villas surrounded by lakes and greenery. I wasn’t quite able to replicate either while maintaining my resource balance, but that doesn’t mean it wouldn’t be possible, rather that the game requires a cognitive skill that can only be gained through iteration and practice. This increases the game’s replayability, and ensures a different result every time.

Real-world design often benefits from the constraints that are placed upon it by its context. Block’hood, too, gains from its abstraction of society and simplicity of use, resulting in a game that offers users an entertaining, stress-free design experience at a scale that is simultaneously architectural and urban.

Block'hood is available early-release on Steam. Learn more about the game at Plethora Project.