Save
The Riparian House / Architecture BRIO 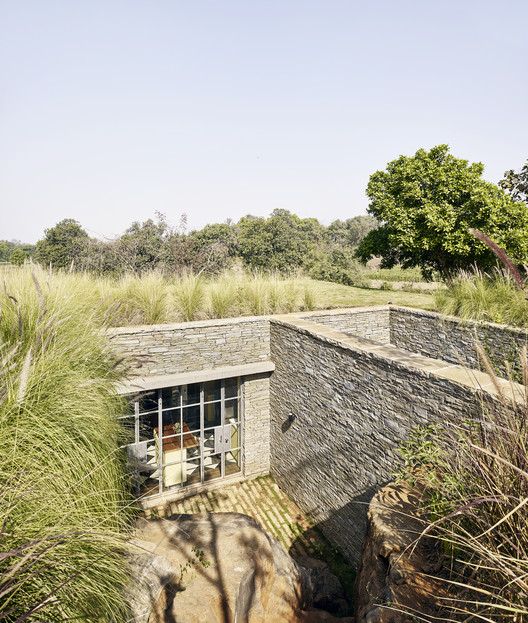 Text description provided by the architects. Not a long drive away from Mumbai, a mountainous landscape rises up, called the Western Ghats. From this UNESCO world heritage area, numerous rivers and streams find their way down through an undulating landscape eventually feeding into the Bombay bay.

The Riparian House is placed just below the top of a hillock at the foothills of the Ghats. The top of a vegetated roof merges with the top of the hillock, hiding the house from the approach on the east side. Inside the house one can nevertheless enjoy the views to the north of the Irshalgad hill fortress and towards the west the sunset while the river winds its way across the agricultural fields.

Since the most of the site is steeply sloping with a 1:4 gradient, the vegetated roof gives the house an additional usable area. From the top it seems to be an extension of the natural landscape, enhancing the under-statedness of the house. The green cover serves to keep the house below cool due to its insulative properties.

Along the central axis of the house landscaped steps lead you along a coarsed stone wall towards the pool deck. A second set of steps connects to the main level of the house where the axis culminates via the dining room and kitchen into a light filled courtyard. The experience of being inside the earth is enhanced through the stone boulders which were discovered during the excavation process and retain the earth.

The kitchen occupies a central position along with the open to sky courtyard and is flanked on either side by two bedrooms at the two far ends. These spaces are embedded in the earth with windows brining in ample light from above and the river side.

Galvanized steel mullioned windows break down the scale of the front façade of the house. A rhythmic row of bamboo poles is placed at close intervals in front of the house to create a layer of privacy without obstructing the spectacular view of the river and the mountains beyond. The bamboo enclosure creates a dialogue between the interior and the dramatically changing landscape. The natural landscape changes from a dense brightly green coloured jungle-like forest during the monsoon months to a pale brown shrubby wasteland during the dry and hot summer months. The building has to respond to these extreme conditions by allowing enough shade and breeze during the summer and providing a waterproof indoor environment during the stormy monsoons. The screen of columns creates an ever-changing pattern of light and shadow throughout the seasons and times of the day, making the building a ‘sensor’ of light.

The walls are build in Indian limestone in a coarsed pattern, which make the house seem to rise out of the ground giving it a solid base. This is contrasted by the lightness of a suspended timber deck verandah which surrounds the house on three sides. The covered verandahs allow for comfortably ventilated and shaded semi-indoor spaces. Internally the timber floor continuous as a border around various patterned natural stone floors. In front of the living room the deck extends to form a large outdoor deck with a panoramic view of the surrounding landscape