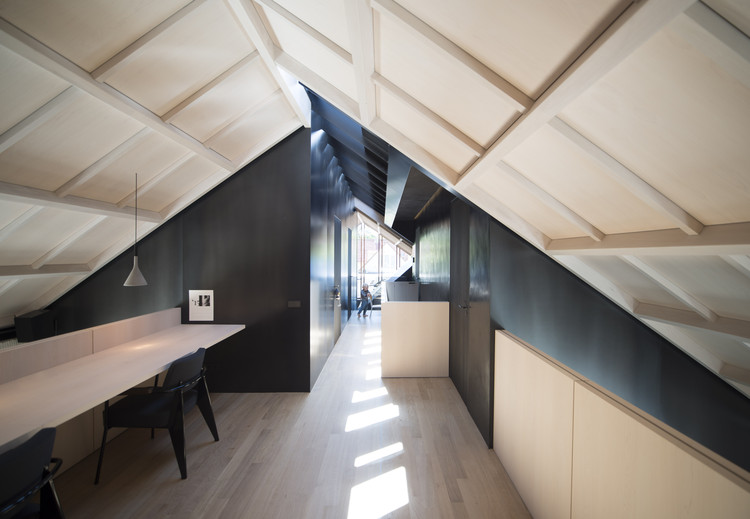 Text description provided by the architects. In the middle of a one of the most beautiful dune landscapes in the Netherlands the small town of Schoorl is situated. It is surrounded by an almost surreal landscape, serene nature and magnificent views and vistas. A typical authentic Dutch landscape, of which only a few are left. At the end of one of the many lanes with high trees, a dark silhouette has risen. A family farm, which is a modern interpretation of a typical black barn common in the region.

The required program is translated into a clear programmatic grid, which is also used as a starting-point to arrange the spatial concept. The grid is modified compared to the former grid and spatially translated into several opened and functional objects. Depending on the different functions the objects were designed in a more open or closed manner. The volumes were then modified to form a succession of open, closed, light and dark spaces. Inside the volumes intimate spaces such as the library, music room, studio, bedrooms and bathrooms exist.

In between these volumes, a central, open living area connects to the veranda where the exterior flows into the interior, a moment to enjoy to the surrounding landscape. The objects within play a game with the outer surface of the house and volumes pierce through the main mass. This results into an impressive interaction of volume and structure forming a sculptural entity.

The outer shell is materialized with black metal, a combination of anodized aluminium for side facades and roof, and a solid, one piece, rolled steel plate for the front façade. The flames that characterises rolled steel have a certain natural beauty, relating to its natural surrounding.

A high level of detailing characterizes the villa. Studio PROTOTYPE achieved this refinement by partly taking over the role of the contractors and subcontractors with, for instance, initiating the development of a transparent coating to preserve the characteristic natural marking of rolled steel and prevent oxidation in the harsh salty sea climate.

The interior volumes are again materialized with rolled steel, in contrast to surrounding spaces where light maple wood is used. The floor of sand coloured concrete has a direct relation to the dunes outside. Furniture elements have been designed in coherence with the rest of the building. This results in a spatial puzzle and timeless atmospheres where the building and interior seamlessly merge.