Save
Between the Kaleidoscopic Present and the Uncertain Future: A Case for Temporary Architecture
Share
Or
Copy

Temporary architecture is often misrepresented as a flimsy trend or photo-ready quick fix: easy, entertaining and often, mistakenly, cheap. This is Temporary concerns itself with a group of young, emerging, socially minded group of architects and designers who are taking the city back into their own hands and creating experimental sites for interaction and engagement. These architects, collectives, students and artists are designing transient structures, situations and events that invest and embed themselves in a community, public space or set of ideas.

Read an excerpt from the book This is Temporary after the break.

What they all have in common, apart from being relatively young in architectural terms and infectiously passionate about their craft, is a concern for engaging people and enriching local communities, and for collaborative, participatory ways of designing, making and building. These architects  aren’t daydreamers: they’re making extraordinary things happen. The projects are inventive, experimental and playful, but at the same time they’re also well-considered and empowering ways to create animated, deeply rooted places in the neglected, disused and sometimes inaccessible parts of our cities. They’re not just temporary pavilions but community workshops, meeting places, public realm projects and urban strategies too.

Witness London-based multidisciplinary team The Decorators’ programme of events and initiatives at Poplar’s Chrisp Street Market, an area undergoing massive change, that included not just new market furniture, but a radio station for broadcasting events and a town team to foster a dialogue and build a relationship between local residents, developers and the council. In this case, the temporary was used a tool to inform and empower the local community. We Made That’s Meanwhile Use Toolkit for Croydon provides an online resource to guide people through the process of setting up their own temporary uses with practical steps, resources and case studies. Or German duo Folke Kobberling and Martin Kaltwasser’s Jellyfish Theatre in London that was built by more than 100 volunteers from discarded theatre sets and humble timber pallets. There’s also the work of Berlin-based Plastique Fantastique that uses transparent, lightweight, blow-up plastic bubbles to gather people and create a shared public space. The same structure can be inflated, squeezed in between buildings or parked in urban squares, before being reused somewhere else to form a whole host of weird and wonderful urban interventions.

Here, Shumi Bose’s essay is concerned with the political value of temporary architecture. She argues that with the social aspiration of these projects, involving alternative social encounters and shared experience, the temporary can galvanise collective desires, engage with larger forces and point towards more enduring change.

This introduction has been written by Editor of This is Temporary, Cate St. Hill.

Party On: The Political Value of Temporary

Architecture is generally considered as a slow and cumbersome discipline, limited in its ability to respond quickly to crises or changing social climates. Read a medium of communication, architecture’s political statements are typically made in exaggerated terms of permanence – consolidating an imperial presence, for example, in mighty agglomerations of stone and brick. When rapid political responses do manifest in urban space – as with the multivalent #Occupy movements around the world – there tends to be little of architectural quality or significance attached. So in the context of the architects and designers featured in this book, and the field of temporary architecture in which they are blossoming, where is the political value?

Temporal, collapsible and mobile structures have long been associated with activism and the demonstration of new social orders: think of the unbuilt designs of Archigram, Haus Rucker Co or the French collective Utopie. As platforms for primarily social and political activities, their proposals used 'Instant Cities' and inflatable structures to disrupt the status quo, suggesting new ways of living. It is worth remembering that the members of Archigram dreamt up their radical proposals while holding secure jobs at the then London County Council, designing large public buildings like the Southbank Centre. Today, such opportunities are far between, and the rise of temporary projects has undeniably given many young architects a real platform to prove their mettle. Particularly after the financial crisis of 2008, the common sense argument to make 'meanwhile use' of otherwise dormant sites invited many imaginative proposals from young architects, and allowed the heady possibility of making something real, even if for a little while.

For all the suggestions of radical spontaneity, today's temporary or pop-up architecture is sooner associated with commercial opportunism – the direct production of capital value for someone, somewhere. Pop-up shops are the most obvious demonstration, but also gastronomic destinations, boutique bars and 'incubator' workplaces. To mine history again, Mies van der Rohe's Barcelona Pavilion, possibly the most famous pop-up of all time, was conceived for a commercial expo, and was one of many hundreds of trade fair stands designed by the great modernist. If the commercial colonisation of urban space seems inevitable, it is worth noting that being temporary is key to producing value. Predicating on the 'experience economy', the very temporality of these spaces adds exclusivity: blink-and-you'll-miss-it, you have to be there. Accordingly, the architecture must be memorable and emotive, and essentially photographable, such that the experience can at least be prolonged and multiplied through the sharing of social media.

The products of temporary architecture therefore straddles two moments: the kaleidoscopic present and the uncertain future. Pre-empting larger forces of gentrification and urban renewal, temporary architecture can act as a means of creating interest, a transition slide for what is yet to come. A cynical reading could view the telltale signs of shipping containers and upcycled pallets as low-cost smokescreens, disguising morally and financially questionable processes of speculative development: behind the painted hoarding and collaboratively designed bench, the big machinery of gentrification and regeneration continues apace, capitalising on the goodwill established at ground level. For developers, having one's brand implicated with successful creative endeavours—especially public realm and community interventions—is an invaluable hype generator.

Capital itself is amoral and for architecture, the production of value is no bad thing. Yet political agency comes with the recognition that our work, as architects, enables us to engage with larger forces, and that we are complicit with its engines. In the fêteing of very real achievements at small scale, young architects would be wise not to miss out on the bigger picture, using such opportunities strategically. This could mean developing technical capacities, permanent skill sets and career-boosting networks – at any rate, by insisting on the opportunity to infiltrate the machinery of large-scale change.

Though not overtly political, most of the works in this book do not lack in social aspiration. New civic meanings beyond market-driven property and planning frameworks are proposed, often providing a facility or service that wasn't there before – the following pages are filled with community workshops, meeting places, and many other inventive examples, sensitively tuned to the needs of specific localities. This is the great privilege of small-scale temporary interventions, especially when undertaken with the youthful chutzpah to stretch tiny budgets, and by architects for whom the zeal of social intervention still seems real.

In such cases, the architect has political agency in highlighting what is essential to the heathy functioning of social and civic life. As opposed to the exclusive world of boutique retail, the fragility of temporary architecture is a reminder of the lack of investment into the permanence of civic and cultural provisions. The precariousness of public services—especially in cultural and creative sectors—is real, and perhaps the displacement of workshops, community spaces and after-school clubs into collapsible tents and temporary pavilions, however well designed, is a problematic reflection of this difficult truth.

But perhaps we would miss a trick by dismissing the power in ephemerality, in the very frivolity of temporary architecture. The literary theorist Mikhail Bakhtin considered the 'carnivalesque' as a means to challenge the overarching systems and binary oppositions of life – between public and private, or sacred and profane. Carnival suggests not just the periodic festivity, but rather the temporary disregard for social hierarchies, the inversion of power structures for the sake of delight – elevating the shared experience of communal celebration as a necessary political force. Of course, such disruption can only ever be temporary – but in demonstrating moments of hedonism, of alternative social encounter and shared experience, the temporary can galvanise collective desires and point towards more enduring change, both in societal and built structures. ‘The character of the carnival is universal,’ writes Bakhtin. It is “a societal rebirth and renewal, in which everybody participates” towards the political agency of the pavilion party!

What this might mean, in terms of architectural design and realisation, is amply demonstrated in the many joyful, conscientious, generous and (importantly) beautiful projects featured in this book. If architecture's enduring political statements have historically reinforced the orders of power, then today's temporary interventions are arguably more potent, more acerbic and certainly more democratic – allowing architects and designers to interrupt, even for a fleeting moment, the pace of urban change. Indeed, change is the only permanent condition we live in, so forget forever: long live the temporary. 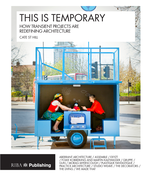 Buy from the RIBA
RIBA Bookshop