Save
House in Hamadera / Coo Planning 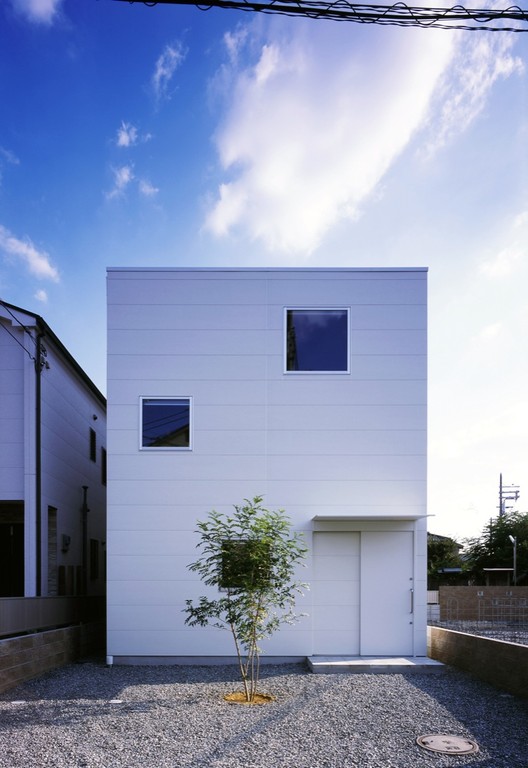 Text description provided by the architects. It is a house where three families who built in Osaka Prefecture Sakai City live. It is located in a quite residential area where an old station and the tram named hamadera suwanomori remain. The master bought land for this town where memories living since the child were deep. It faces in the north and 4m road and east and west face the neighboring house. Rich green though the Suwanomori Shinto shrine is small a place is produced in the south. It is especially considered that green in the south is felt in the plan.

It is a space where the light of the sprinkling sun is felt as for a small window and a top light that holds ventilation and ventilation concurrently to achieve a bright space without installing a big from east to west window. It is an address space configuration of the skip floor where height and the material feeling were made the best use of in the maximum. To install the bookshelf using a full wall, and to enjoy the storage of the book that the number of this favorite families will increase in the future with the growth of a small child and the family, it considered it from east to west.

The space with a little uselessness was borne in mind by assuming the outside Heat insulator by using the pillar, the puncheon, and the groundwork plywood as a bookshelf. Rich green from the Shinto shrine extends from the framed window to the cross in the south. To always feel big green by the distance and the height of each floor, it considers it. The address space configuration to be able to live naturally as much as possible was borne in mind. A natural wind flows to the space by additionally opening and shutting north, south, east, and west and the window installed respectively at the season.

To obtain it, an open mouth of the first floor in the south considers ventilation according to the situation as windows is piled up up and down, and outside privacy doesn't worry. The space wrapped in the tree by installing the wooden door of the movability type in the front shedding that the glance from the road is anxious and uniting materials is emphasized. Energies was devoted into union with the lurch plywood such as the floor, the wall, ceilings, and fittings.

A polite selection and construction were advanced and construction was advanced by thinking about the color and the arrangement of color of paints by feeling light on the attitude site. Creator's mark here and there is felt, and it does at home ..so... The one (feeling of family of long, short house-making similarly, and can importance indefinitely living). Thinking the house to be important and living lead to an environment friendly residence indefinitely. It wishes the depth or more to be increased with the family as time passes.