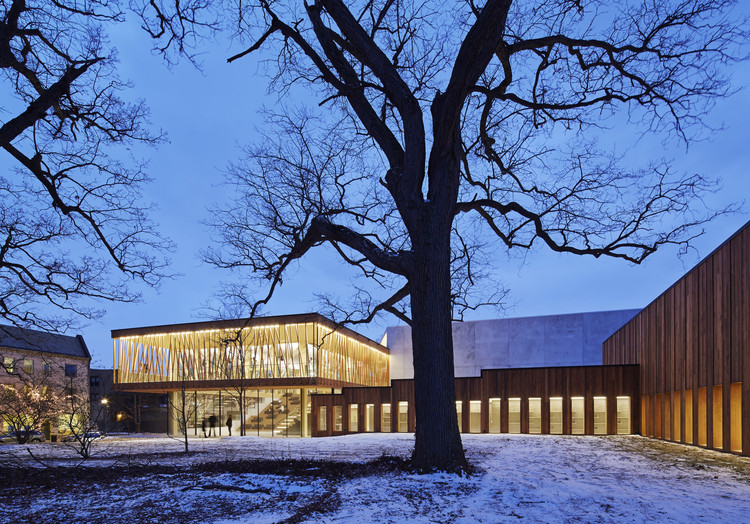 Text description provided by the architects. Writers Theatre is a popular theater company in the Chicago suburb of Glencoe, Illinois. Founded in the back room of a bookstore in 1992, Writers has embraced intimacy as its hallmark aesthetic since the very beginning. In 2003, Writers established a larger space at the Woman’s Library Club of Glencoe, but, at 108 seats, this new venue soon imposed challenges of its own. The company faced bleak economic prospects despite an enthusiastic and committed audience. They were playing close to capacity night after night, but with very few seats to sell and production costs steadily rising, they were in need of a larger, more flexible space to allow for their growth.

Meanwhile, Glencoe—a suburb 20 miles north of Chicago with a population of approximately 9,000 residents—embarked on an ambitious master plan to integrate more cultural and commercial spaces in the downtown area. At the same time, the existing but deteriorated Woman’s Library Club building was in serious need of repair. Partnering with the Woman’s Library Club and the Village of Glencoe, Writers seized the opportunity to build a custom theater center and catalyst for downtown development on the Library Club site.

The company, which plays to an audience of 35,000 patrons each season, has garnered critical praise for the consistent high quality and intimacy of its artistry. With their new permanent home, Writers wanted to ensure these hallmark traits were maintained while also accommodating a growing audience base, improving their facilities for their global community of artists, and creating new relationships with the public. The resulting design, with its transparency and flexibility, is intended to energize daily life in downtown Glencoe, creating an open, welcoming space where the potential of theater to unite people across boundaries through shared experience is rendered visible.

The theater is anchored by a public gathering space that serves as a lobby as well as an informal space for performance, rehearsals, and audience outreach programs, and a formal space for events. Two performance venues, a 250-seat main stage and a 99-seat black box venue, as well as rehearsal rooms and other public amenities, open to this central space. A second-floor gallery walk, providing views toward the downtown, lake, and nearby grove, is structured by timber Vierendeel trusses and a lighter wood lattice hung in tension from the primary structure. In warm weather this central hub opens to the adjacent public park and downtown, allowing the energy and interaction generated within the theater to extend outward into the community beyond. At night, it glows from within like a lantern, drawing interest and activity to this important cultural anchor and downtown Glencoe.

The design of the performance spaces is intended to maximize the sense of intimacy between actors and audience and enhance the immersive experience for which Writers is known. In the larger venue, tribune seating is liberated from the walls, inviting exciting actor entrances and other innovative staging opportunities, further enhanced by a seamless transition from theater floor to stage. In a nod to the history of the company, bricks reclaimed from the Woman’s Library Club building form an elaborately patterned back-of-house acoustic screen that diffuses and reflects sound for an intimate aural environment. The smaller black box venue can be infinitely customized for performances and events. A rooftop pavilion and green roof offer additional event space.

Writers Theatre not only serves its immediate Glencoe community but also attracts audiences from the Chicago metropolitan region and beyond. With the opening of this new cultural facility, nearly 45,000 additional people could be drawn to Glencoe each year to share in the experience of the company’s performances, community events, workshops, and gatherings, infusing the art of performance into their everyday lives. 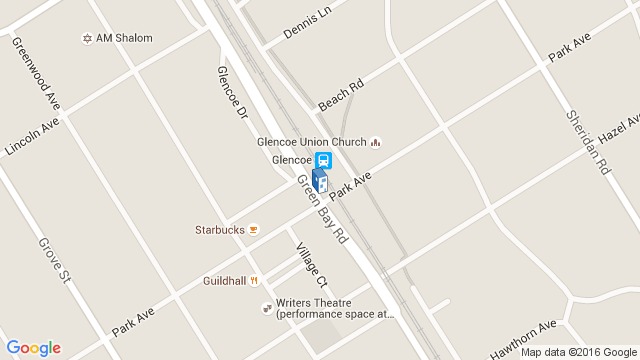 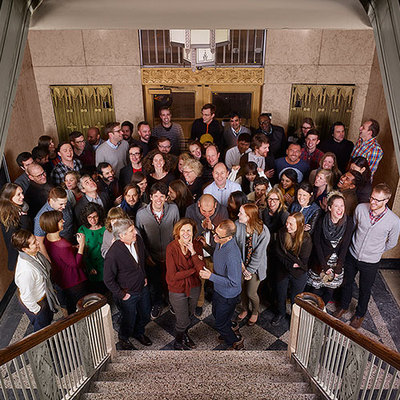