Metals in Construction Magazine and a jury of architects and engineers have announced the winners of the “Reimagine a New York City Icon” competition. The 2016 Design Challenge, which was sponsored by Metals in Construction magazine and the Ornamental Metal Institute of New York, called for submissions from architects, engineers, students, and designers from around the globe to reimagine the cladding of 200 Park Avenue (formerly the Pan Am Building, now the MetLife Building), with a “resource-conserving, eco-friendly enclosure” that simultaneously creates transparency and preserves the building’s original aesthetic.

The competition was inspired by the President’s Climate Action Plan and the Architecture 2030 Challenge. “The competition was conceived to explore ways of retrofitting existing facades for high performance when preservation and innovation are competing priorities,” said Gary Higbee, AIA, director of industry development for the Ornamental Metal Institute of New York and editor of Metals in Construction magazine. “Recladding a building can give it a new visual identity and radically improve its energy performance in the process. But how do you address this with recognized landmarks? The answers we received in the form of submissions were full of innovative concepts but also underscored how crucial it is for architects and engineers to work together to find successful solutions.”

Read more about all six finalists below.

The PanAm Under Glass proposal displays a new high performance façade. It creates a double envelope around the building. The exterior skin acts as a rain screen and activates the natural ventilation, while the inner skin regulates the internal climate of the building. This design also includes operable windows.

Compared to the existing MetLife Building, this proposal reduces the amount of energy used by 54%, reduces carbon by 56%, and reduces the overall negative impact on the environment by 42% over the next fifty years. Due to the fact that concrete is one of the least recyclable materials, the existing façade will remain, but a high-performance overcladding will be added. This new curtain wall integrates transparent photovoltaics and an LCD system into the glazing. All of these features combined will reduce glare by 91%.

The Thermalswitch façade combines overcladding and double skin techniques to create a unitized frame that fits right over the existing concrete façade. The cavity within the skin is slightly vented and tilts either towards or away from the sun depending on the temperature. This tilting mechanism creates a convection current that pulls fresh air from the outside and warms it as it enters the building, or vents out hot air by drawing cool air from the building core.

This redesign of the façade focuses on reconnecting the building with Park Avenue and introducing sustainable features wherever possible. The design creates a double skin that will maximize the building envelope’s performance. Some of the features include a solar backbone and greenbelts, which allow the building to “breathe” and reduce the cooling load, sky parks and gardens, and solar hot water collectors at spandrels that will drive an absorption chiller.

This design allows for the new façade to react differently during all seasons of the year. Unlike many of the other schemes, this plans on demolishing the old façade to create a new façade that features a large Michell Truss. The new high performance façade will greatly improve passive solar heating and act as an actively vented façade cavity with phytoremediation pre-treat for air handling unit.

The Farm Follows Fiction design imagines turning the building into a vertical farm. Through solar collection and rainwater harvesting, these vertical gardens will provide produce and allow ideal amounts of daylight to enter through the glass façade. The goal is to make this building become the ultimate eco machine. 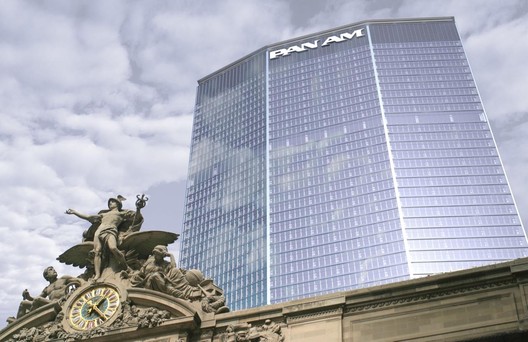