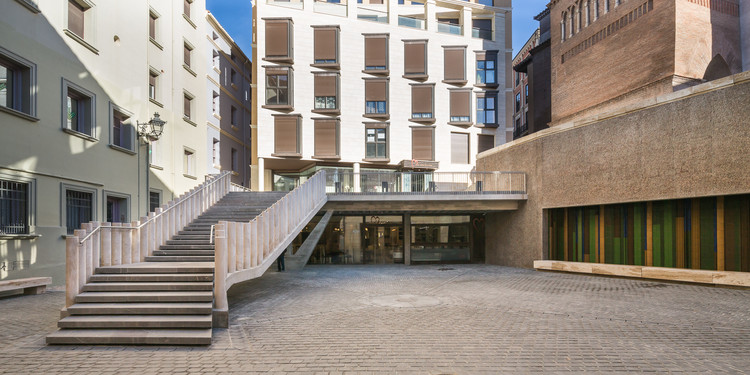 Text description provided by the architects. The Lovers Square was not exactly a square but the void caused by the bombing of the Civil War that devastated the city. However, it was attempted throughout the postwar period, and with varying degrees of success, to turn that void into a square relying on its central location and the dominant presence of the iconic San Pedro Tower, which before the war, like the other Mudejar towers of Teruel, had been built between houses and on the street, like a tower-door wall. But this situation had drastically changed with the bombing, as the tower was isolated on one of its sides, allowing its view from the bottom of the void that was the location for the new square.

In 2008 and after several failed attempts, a restricted competition was held, to which some well-known European architects were invited, and whose outcome determined the project that has finally been implemented.

The state of the square at that time was bleak, the result of the deterioration of the intervention that took place in the early 70s and the marginal character of the space, as it was barely related to the upper level of Matías Abad street, where the tower and access to the Lovers Mausoleum are located.

Elements of the square

The square is defined by three elements: the fountain, the stairs and a terrace which joins them.

The fountain is part of the base wall of the tower and is configured as a sheet of water that slides down a ceramic wall formed by industrial parts whose palette is based on the Moorish ceramics and, in particular, those existing in the San Pedro Tower. The texture of the wall, washed concrete composed of an arid reddish color, relates to the rough texture of the brick of the tower thereby expressing its condition of base. A solid travertine bench and a strong capstone of the same material tops the wall, whose horizontality contrasts with the verticality of the tower and hides the slope of Matías Abad street and the access door to the mausoleum competing for its strong presence with the tower itself.

The staircase has a monumental character because it is a stairway with an urban character that widens as it rises and rotates at the start to symbolically welcome the public that rises from the lower level of the square. To highlight this monumental character while strengthening its contemporaneity, it rests on a concrete slab on a beam that rests, in turn, on two points: the start and a pillar in the shape of a "V" that also serves as a support for the terrace slab. This allows one to transit below the staircase extending the space of the square that flows beneath it.

To reinforce its uniqueness and its urban character, which would not be achieved with a conventional rail, we have designed a balustrade reinterpreted from a contemporary perspective.

Quality materials and expressiveness characterize this public space, because it was considered that a square is a place that requires strength, on the one hand, and a tone of timelessness, on the other, and thus should not answer to any kind of experimentalism or fashionable formal approaches, particularly since it is an emblematic space in the heart of Teruel. But, because of that, the treatment of the space requires a certain expressive force to reaffirm the importance of the place. From that point of view it is understood that the use of material expression is a requirement that can be supported in a strict and contemporary language.

Exposed concrete and stone are the basic materials. The first is done with wood formwork on the stairway slab and the porch, while the wall-base is made of washed concrete with an arid violet reminiscent of rodeno stone and whose roughness harmonizes with the tower brick. This roughness also contrasts with the ceramic cladding of the fountain, which also occurs in the tower between the brick and the ceramic.

Stone is the most abundant material in the square. There are two types: gray Calatorao used in the massive stair treads, in the stone slabs of the terrace floor and in the cobbled center as well as the expanded enclosure of Matias Abad Street. Another type of stone is travertine for benches, particularly in the solid bench by the fountain, the capstone that finishes off the wall-base and the stair balusters. The latter also relates to the columns of the same stone decorating the tower.

Achieving adequate lighting has been an important objective in the project of the square. Although some elements that illuminated the old square have been kept, like two old lanterns that have been remodeled, most of the lighting occurs without resorting to street lamps, instead using hidden systems under the steps and benches, as well as within the fountain and between the joists of the porch. The aim was to highlight the main elements of the square including the tower, whose light has been treated and whose silhouette presides at night over the Lovers Square. 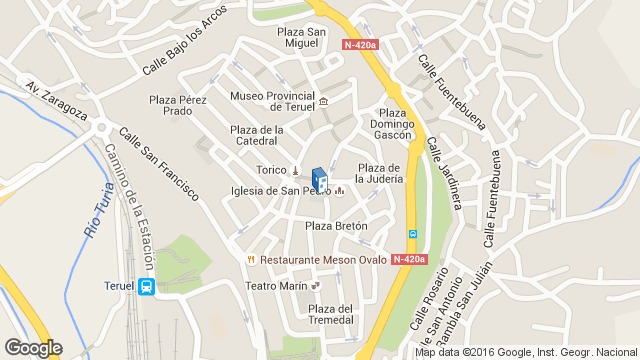