Half of Santiago Calatrava's $4 billion World Trade Center Transportation Hub is set to "quietly" open next week, according to a report by Crain's New York. Heavily criticized for being seven years overdue and twice its original cost, the public project has been labeled a "symbol of excess" by some and a "legacy project" by others. Despite the criticism, its 355-foot-long operable "Oculus" is "breathtaking" says New York Times reporter David Dunlap.

“It is necessary,” Calatrava told Dunlap, “that public space prevail... A balance is struck at Grand Central Terminal, and it will be here."

"The combination of natural light and sculptural form give dignity and beauty to the building's lower levels and pedestrian walkways, and provide New York City with a kind of public space it has not previously enjoyed," Calatrava added in a statement.

The station's ribbed exterior (inspired by a bird in flight) is complete, however parts of its interior is still under construction. The Port Authority plans to complete it later this year. 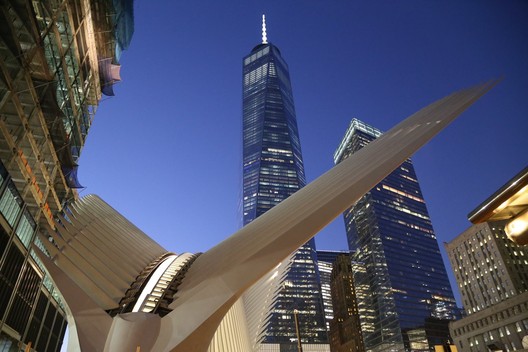