IaaC Student Elena Mitrofanova, working alongside biochemist Paolo Bombelli has created a proposal for a facade system that utilizes the natural electricity-generating power of plants. Consisting of a series of hollow, modular clay "bricks" containing moss, the system takes advantage of new scientific advances in the emerging field of biophotovoltaics (BPV) which Mitrofanova says "would be cheaper to produce, self-repairing, self-replicating, biodegradable and much more sustainable" than standard photovoltaics. 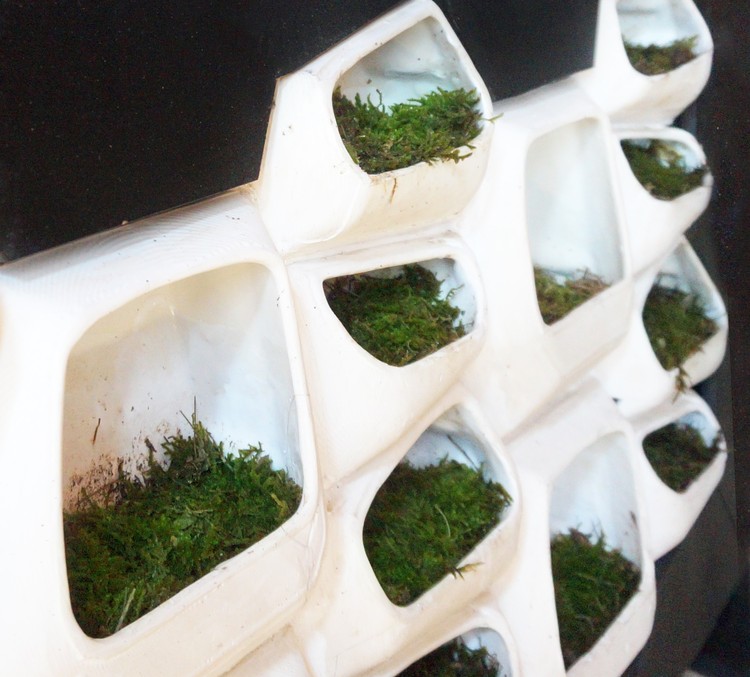 The system is able to generate electricity thanks to a type of symbiotic bacteria that lives alongside the moss. When moss photosynthesizes, some of the organic compounds it produces are released through its roots into the soil below. The bacteria feeds on these compounds, breaking them down into a number of byproducts - one of which are free electrons.

The moss is planted in a "soil" made of hydrogel and carbon fibers that attracts the electrons and acts as an anode, harvesting the electrons to generate electricity. Mitrofanova's prototype shown here was able to produce 3 Volts from an assembly of 16 modules - which may not seem like much, but with the increasing efficiency of modern appliances the system could still be put to use powering, for example, a building's LED lighting. Mitrofanova believes the system would be most effective in more Northern parts of the world, where standard photovoltaic panels are less effective but moss thrives.

The "bricks" themselves are designed in a way that encourages the moss to thrive, including deep voids which shelter the moss from direct sunlight. The clay components are left mostly unglazed, which allows the material to absorb a small amount of rainwater and therefore keeping the air around the facade damp for as long as possible. The bottom of the inside of the brick is glazed however, to make it waterproof and prevent the deterioration that could be caused by pooling water. The bricks are designed to interlock without any requirement for mortar, while the interlocking enable the electrical connections required to link up the modules into a single electrical circuit.

Moss is not the only type of plant that could be used for such an effect though, states Mitrofanova; however, mosses were chosen because of their light weight, high drought tolerance, low maintenance requirements and their resistance to the conditions often found in cities. 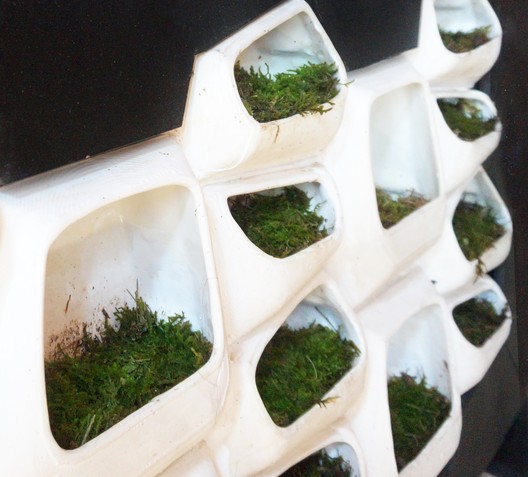