Alves captures emblematic national architecture projects in addition to work by prominent architects worldwide, “fusing the vision of the architect” with that of the photographer. He is also known for his “Archilapse” videos, which feature timelapse montages of architectural works.

Read an interview with Alves and view a selection of his images after the break. 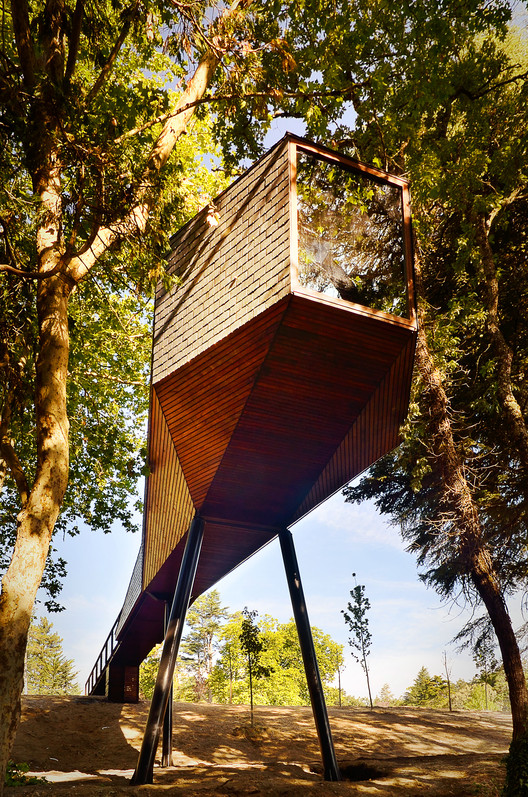 I started photographing early, around 14 years old​. ​As I started studying architecture, I also started working at several architectural studios, and shooting the studio projects​ and​ exhibitions was one of my work responsibilities​​, so my relationship with architectural photography became closer.

I never finished my architecture degree. I was studying at the same time I was working at ​architectural studio​s​. I was lucky enough to be one of the first collaborators to enter a brand new Lisbon architectural studio based in Madrid (Equipo 4d with Leading and Partner Architect, Samuel Torres de Carvalho). There I​ learned a lot and it was very demoralizing going to university as I learned 10 times more every day in the studio​.​ Also, the studio work was very demanding: lots of hours, all-nighters, architectural contests and so on: an architect's work life. That consumed all of my time and motivation, leaving the university in 2nd place and the studio as my priority. So I never finished it and I do not regret it.​ I have the soul of an architect and will always have one. ​​After leaving the job in the architectural firm, I studied 3D animation, and afterwards I worked in one of the major Portuguese 3D architectural vizualization studios. So architecture was, and still is, always present in my life in​ ​one way or another. Even today I share a working place inside an architectural studio.

Architecture is part of me, all of my work life, 80% involves architecture. Also, the privilege of being alone in an architectural project, exploring it, understanding it, feeling it... there is almost something spiritual in it. It's the quality time that I spend inside architectural projects that drives me every day to be better at understanding and interpreting the projects' spaces and the concepts made by their authors.​ There is nothing like being in an architectural space, however good the pictures of a project are, nothing compares to physically being in an architectural space, and yes it is a privilege. It's a privilege doing what I love. My ​goal is not to shoot 10 projects in a week but to shoot special projects​ ​and to take the time to enjoy them,​ to better communicate what they have to say, thanks to my visual mediation.

Impossible to choose because I have to experience the building to make a selection and there are a lot of buildings that I have never been into... In Portugal a few spaces I just love to be: Gulbenkian, Casa das historias da Paula Rego, Serralves... I would love to visit the architectures designed by Wright, Lautner, Niemeyer and shoot them all!!

I work alone​! It's​ me, ​the ​space and the camera on a tripod. After shooting, I select photos for the client and then I color correct them and edit some details that the clients normally ask me to do. After that, Carlos, who works with me, starts publishing the work in magazines worldwide and on the web because the photographer is the ambassador of the architectural projects, it's him who spreads the work.

7. What kind of equipment and software do you use?

My equipment is a Nikon, it's a D800e with a 14-24mm Nikon lens. For software I use Bridge, Lightroom, Photoshop, after effects and premiere for Archilapse.​