Save
Making Sense of The Broad: A Milestone in the Revitalization of Downtown Los Angeles
Share
Or
Copy

Unlike most American cities, which spent the 20th century radiating out into suburbia, Los Angeles befuddles outsiders because it doesn’t really have a definite center. The phrase “LA” is loosely used to refer to a collection of small yet distinct cities across the Los Angeles basin that grew together over time. Traditionally, a handful of these localities have been the cultural centers and tourist destinations (Hollywood, Santa Monica, Beverly Hills, Silverlake, etc). While these districts thrived, “downtown” sat largely neglected; its financial towers and retail spaces had severe occupancy issues for much of the 90’s and 2000’s. Ten years ago, downtown street life outside of working hours was virtually nonexistent.

That fate was largely the result of poor urban planning. The tragic destruction of the vibrant Bunker Hill residential neighborhood in the 1960’s created a series of vacant freeway-flanked “superblocks” intended for ugly, efficient modernist towers - many of which never reached fruition. To this day, the area is still plagued with empty lots. Developers and architects have considered downtown as a risky return on investment ever since.

DTLA wasn’t just the butt end of jokes (Family Guy: “There’s nothing to do downtown!”) it was treated with disdain. Even Frank Gehry said on record that he wished the Walt Disney Concert Hall had been constructed 12 miles away in Westwood (near UCLA). He went on to add that he felt the current attempted revitalization of downtown was: “both anachronistic and premature.” Ouch. 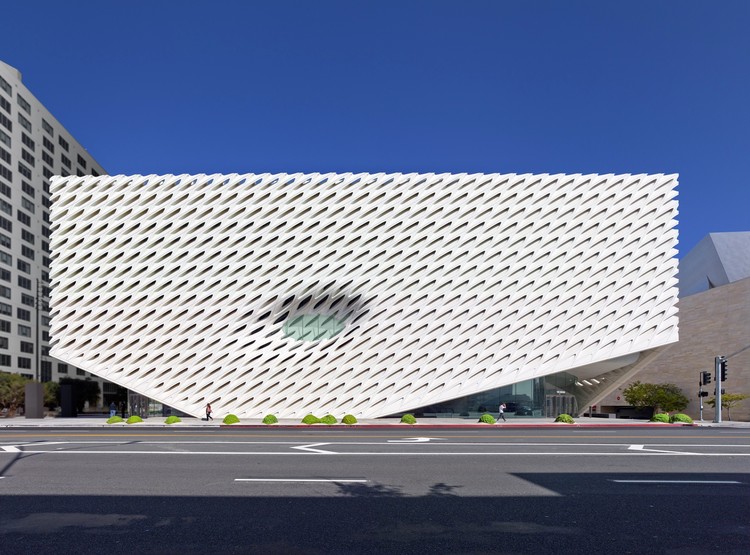 It’s little wonder then that when prominent Southern California billionaire art collectors Eli and Edythe Broad sought to “give back to the city” by funding a $140 million contemporary art museum, they shopped around for the perfect location. The Broads considered Beverly Hills, Santa Monica, even Culver City, before eventually selecting an unoccupied downtown lot on Grand Avenue across the street from Gehry's Disney Concert Hall and adjacent to the Colburn School and MOCA; likely thanks to an appealing government subsidy and low income housing deal with the city.

After acquiring the lot, The Broads held a discreet competition between a number of prominent design firms: Diller Scofidio + Renfro, OMA, Herzog & de Meuron, Christian de Portzamparc, and SANAA, with DS+R eventually coming out on top. The plans were released and the public reaction was very positive. The New York firm touted their ruthlessly efficient three story design as the “veil and the vault.” The original approved facade called for a dramatic parametric honeycomb of white precast concrete forming the “veil” - a dynamic exoskeleton that both enveloped the entire structure and supported its roof. The “vault” refers to the 2nd story concrete sarcophagus smothered in Venetian plaster that holds the rest of the Broad’s collection not currently on display.

To anyone familiar with Diller Scofidio + Renfro’s original renders, it’s difficult not to be filled with a sense of disappointment when gazing at the structure. You grieve for what might have been. This is no fault of the architects. The Broads are currently involved in a lawsuit with Seele Inc, the German engineering firm in charge of manufacturing the museum’s facade. The debacle resulted in a 15 month delay, $20 million cost overrun, and a watered down design. Seele claimed that the original facade was too difficult to manufacture, and wouldn’t withstand a Los Angeles earthquake. This is unfortunate; the building’s exterior is now decidedly less distinct than the original design and suffers in comparison to Gehry’s adjacent masterpiece. The as-built structure is far from being an eyesore, but if it weren’t for the hipster mobs swarming the site, I wouldn’t blame anyone who thought The Broad was Disney Hall’s ambitious new parking structure. Taking the form of a nearly perfect rectangular prism, and the color a uniform off white, the building’s pattern and texture become hugely relevant. The most common nickname I hear is “the cheese grater.”

Despite the compromised exterior, the Broad’s gallery spaces are exquisite. After a dramatic escalator ride through a womb-like tunnel that pierces the vault, visitors find themselves transported from the cramped lobby to the airy main gallery on the third floor. It's an absolute joy to meander about the column-free space. Hundreds of sensor-activated sunshades embedded into the roof refract indirect sunlight into the space through the myriad skylights in the "veil," lighting the art naturally and uniformly. When visitors are done with the main gallery, they can either take a cylindrical glass elevator back through the vault, or wander down a staircase with a number of submarine-like port holes that offer more sneak-peeks at the nearly 2000 pieces of art not on display. The staircase spits you out back into the jam-packed lobby where you exit through the gift shop.

The whole experience has a very West Coast sense of informality, and is downright refreshing, especially compared to the LACMA docents who bark if you look too intensely at the art. (Do they have any idea how off-putting that is?) At Eli and Edythe's house, the museum-goers truly interact with, get lost within, and make a day of The Broad, and that alone makes it successful.

As for the collection itself: I’m a huge fan of Basquiat, Haring, Lichtenstein, and Warhol. I could do without the gaudy Jeff Koons.

No matter what one thinks of the Broad’s architecture, a four block long mass of people waiting to see what all the fuss is about is a beautiful sight to behold, especially considering the site was an empty parking lot a couple years ago. My first attempt to enter The Broad left me queueing under an overpass for over 2 hours and eventually bailing. I was smarter next time around and actually had a timed entrance ticket. This place is still hot - as of this writing, tickets are booked through May - and will likely remain so throughout 2016. Anything that can make Angelenos trek downtown for something that isn’t jury duty is welcome in my book.

The Broad has free admission but you must make reservations online.

Thomas Musca was the assistant curator for the Architecture and Design Museum’s 2013 exhibition Never Built: Los Angeles. He is currently studying architecture at Cornell University.