The Los Angeles County Museum of Art (LACMA) has announced that John Lautner's famous LA residence, the James Goldstein House - often referred to as the Sheats Goldstein Residence - has been promised to the museum by its current owner James Goldstein. The gift includes the house itself, a James Turrell skyspace which is located on the property, and architectural models of the home (as well as a number of artworks and Goldstein's 1961 Rolls Royce for good measure). The house will be the museum's first architectural acquisition, following similar acquisitions of Modernist homes by other museums such as Crystal Bridges Museum's recently-opened Bachmann-Wilson House by Frank Lloyd Wright. 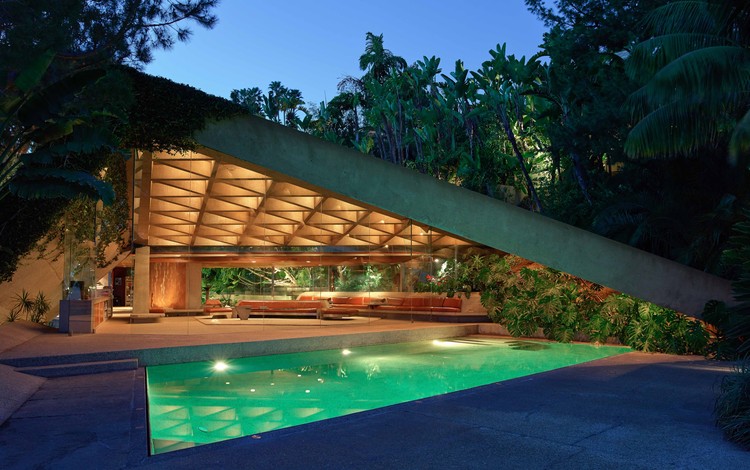 Completed by Lautner in 1963 for Helen and Paul Sheats, the house was bought by Goldstein in 1972, and from 1979 up until Lautner's death in 1994 Goldstein worked with the architect to renovate and update the house according to Lautner's vision. Over the years the home's striking, screen-friendly interior led it to become famous for its role in numerous music videos and films, most notably starring as pornographer Jackie Treehorn's house in The Big Lebowski.

“Over several decades, Jim Goldstein has lovingly cared for this house, which is an exceptional example of domestic architecture and a tremendous legacy in our own backyard," added LACMA's CEO and Wallis Annenberg Director Michael Govan. "Great architecture is as powerful an inspiration as any artwork, and LACMA is honored to care for, maintain, and preserve this house, as well as to enhance access to this great resource for architecture students, scholars, and the public."

"Over the course of many meetings with Michael Govan, I was very impressed with his appreciation for the history of the house and the role it has played in the cultural life of Los Angeles, as well as with his vision for continuing that tradition when the house becomes an important part of LACMA's collections," added James Goldstein. "Following last year’s 50th anniversary gifts to LACMA, I decided now was the perfect time to announce that I will leave my house and its contents to the museum. Hopefully, my gift will serve as a catalyst to encourage others to do the same to preserve and keep alive Los Angeles’ architectural gems for future generations."